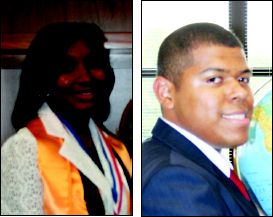 On March 26, at 8 a.m. members of the Aldine Senior High will celebrate the completion of their grade-school career with Commencement. The ceremony will be held at the M.O. Campbell Center on Aldine Westfield Road.
Gina Rosalie Roberts is this years valedictorian. Salutatorian is Melinda Soeung.
Rounding out the Top 10 are Michelle Crystal Hurtado , Felipe DeJesus Corral, Abel Barrera, Annette Leija, Cindy Carolina Bonilla , Amanda Renee Maglitto, Denisse Ramirez and Maria Hilda Jaimes.
Students from MacArthur High School will gather at the Campbell Center on May 28 at 5 p.m. for their Commencement.
Feross Khalil and Priscilla Cavazos are MacArthurs valedictorian and salutatorian, respectively.