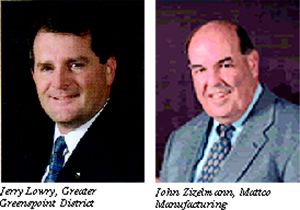 Lowry was cited not only for his position as VP-COO of GGD, but also as past president of the North Houston Greenspoint Chamber, Greenspoint Community Partners, involvement in many diverse community organizations, and a leader in improving public safety in the area.
Zizelmann was cited for his outstanding contributions to community organizations and activities beyond his business interests.