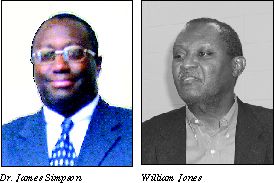 By BOBBY HORN, JR.
Bucking a recommendation by a Texas Education Agency examiner, the North Forest ISD Board of Trustees has said they will not reinstate Dr. James Simpson as superintendent of the district.
On May 25, the board met in a special called meeting to review the recommendation and decided on Simpsons contract.
During the meeting, the board decided to place Simpson on suspension with pay pending further appeals. They also said that William Jones would continue to serve as interim superintendent.
Earlier in the week Jeff Horner, an attorney and independent examiner working on behalf of the Texas Education Agency ordered the North Forest Board of Trustees to reinstate Simpson.
Horner said that in March, when the board voted 4-3 to terminate Simpsons contract they did so illegally. The board, he determined, did not provide Simpson with due process that is; they did not follow the proper procedures in terminating his contract. Specifically, the board did not notify Simpson is advance of the March 8 meeting that he could be fired. According to the post agenda, which is required for all open meetings, the board was scheduled to discuss and/or take action on Simpsons contract.
The North Forest ISD was ordered to return Simpson to his former post as well as pay him $35,000 in back salary.

Board President Barbara Gaston, who voted to fire Simpson, sent the superintendent a letter on March 13 explaining the boards vote.
The letter, Horner wrote in his ruling, came as some type of attempted after-the-fact due process. Horner also said the letter provided little specific connection between the areas of Simpsons alleged deficiencies and district policy.
The board has maintained that they had just cause to fire Simpson and they stand by their decision.
Simpson said that he was fired in retaliation for investigating allegations of illegal or improper activity against district police officer Gerald Eagleton.
Eagleton was formerly married to the sister of school board member Charles Taylor.
Gaston, however, said that Simpson not only failed to properly advise the board of a bomb threat at a district school and failed to timely notify the board regarding preliminary TAKS results but that the board had lost confidence in his ability to lead the district.
At the time of the firing, North Forest ISD was also under an investigation by the TEA. The school district, the TEA said, had failed to account for some funds provided by the Federal Emergency Management Agency for repairs following Tropical Storm Alison. The funds were discovered missing prior to Simpson coming to North Forest.