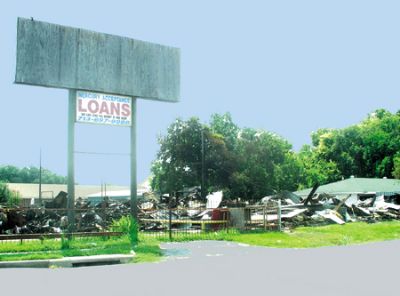 Houston Fire Department arson investigators are looking into the cause of a fire which occurred at the site of a June homicide in Northeast Houston.
Firefighters were dispatched to a metal building around 4 p.m. on July 31. The building housed a tire and auto shop as well as J&W Fashions. J&W Fashions was the site of a June 10 homicide.
According to an HFD spokesman roughly 50 firefighters from 17 units were called to the scene. Like other petroleum-based products, tires create a thick black smoke which makes fire suppression even more difficult.
Homicide Division Sgt. J. Padilla said that they are working with the arson squad to determine if the fire might be related to the death of businessman Willie Earl Scott.

On June 10, a customer visiting the clothing store discovered Scotts body in the back storage room of the clothing store.
Padilla said that Scott, 42, of 718 Corvette Court suffered a gunshot wound to the neck and was pronounced dead at the scene.
Initially Scotts vehicle, a 1996 white Ford van, was reported missing from the location. On July 12, police recovered the missing van at a home on Reddy Road near Clark Spring. Police continue to search for suspects in the case.
Padilla said it is possible the fire was intentionally set in order to damage the crime scene, but they cannot be sure until the arson investigation is complete. Typically during an arson investigation officers will use either specially trained dogs or electronic devices to detect accelerants.
However due to the nature of the auto shop, investigators would expect to find accelerants at the scene, so other clues must be discovered.
Anyone with information regarding the case is asked to call Crime Stoppers at 713-721- TIPS (8477). All callers can remain anonymous.