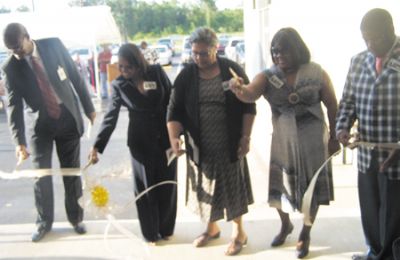 BY BOBBY HORN JR.
Last weeks dedication of the North Forest ISD Administration Building gave school personell and the community a chance to celebrate a district achievement as well as reenforce their committment to the children of the district.
The new administration building is located at 6010 Little York Road at Homestead.
The dedication opened with the Posting of Colors by members of the Forest Brook High Navy JROTC and national anthem by the Forest Brook High Band.
In greeting the patrons in attendance School Board Member Maxine Lane-Seals said that group effort in moving from the destruction of the old building to the dedication of the new echoes the challenges facing the district. Quoting lyrics from a song, she said, We may fall down… but we get up.
Lane-Seals warned about letting outsiders try to divide the community by bringing negative ideas.
North Forest will be second to none, she said.
State Rep. Senfronia Thompson said that the key to building a stronger community is the children who are educated in North Forest and who later live and work in the community. 
We want to share this occasion with the entire North Forest community, says NFISD Board President Barbara Gaston. Many of our campuses were damaged and our former central office was destroyed by Tropical Storm Allison, but the completion of this administration building signals a new day for North Forest.

Interim Superintendent of Schools William Jones echoed that sentiment, saying the new administrative office represents just one of many areas in which this district will continue to rise and strive to meet every challenge.
The district officially moved into the facility in early July. The roughly $3.3 million renovation of the former Northwood Middle School took about nine months to complete after construction started in October 2006. The building houses administrative departments that had been relocated to various campuses and temporary buildings throughout the district. Board meetings once held at Shadydale Elementary School are now convened at the central office.
The building, which was designed by Terry Smith & Co. Architects and renovated by DivisionOne Construction, features training rooms to accommodate staff development activities, a spacious reception area for district patrons and space available for community meetings.