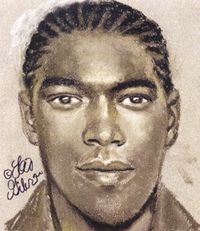 Houston police have released a sketch of the person they believe to be responsible for the shooting death of a North Forest-area businessman.
The shooting took place at a liquor store located at 9902 Homestead about 2 p.m. on July 17.
According to HPD Homicide Division Sergeant A. Carrillo the victim, Henry Bang Tran, 54, suffered multiple gunshot wounds and was pronounced dead at the scene.
Cariilo said that police responded to a call from a customer who walked into a liquor store and observed some things out of place and could not see a store employee.
Tran was found behind a counter. Although his pockets were turned out and empty, Carillo said they have not confirmed that robbery was the motive of the crime.
Carillo said they are hoping that a description of the suspect as well as some unique jewelry left behind will lead them to an arrest.
The suspect is described as a black male between the ages of 30 and 40 years. He has been described as having a slender build and either long braided hair or corn rows.
Near Trans body police found a white and yellow gold chain, approximately 20-24 inches in length, along with a diamond cross. The chain and cross are believed to belong to the suspect and might have been ripped off the suspect during the struggle.
Police are also looking for a potential witness in the case. Carillo said they believe that another black male, in his 40s, was inside the store at the time of the robbery but not during the shooting. Police believe this witness was driving a small, older model black car.
Police are seeking this man for questioning only and say that he is not a suspect in the crime.
Anyone with information in the case is urged to contact the HPD
Homicide Division at 713-308-3600 or Crime Stoppers at 713-222-TIPS.