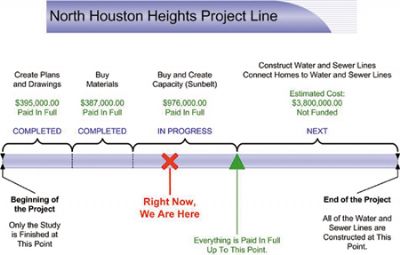 Residents of North Houston Heights recently gathered for a community meeting to receive an update on the water and sewer system that will be constructed for their benefit. The project to bring an older neighborhood in unincorporated Harris County a public utility system is the only project of this type in the state of Texas.
It has taken extraordinary cooperation between Harris County, the East Aldine Management District and the state to undertake this project, State Rep. Kevin Bailey told the residents. After the East Aldine Management District was created by legislation I filed in 2001, I went to the Texas Water Development Board and requested a planning grant for the area. It was the very first step in developing a long-range plan to provide water and sewer service in our older neighborhoods.
The study that was completed in 2004 verified that many neighborhoods lack water and sewer service and have a high rate of septic failure, which leads to contamination of the water in shallow wells. The documentation provided information that is need for grants to pay for the cost of the construction project. When the system is complete residents will pay a water and sewer bill, which covers the cost of the systems maintenance and operation.

Bailey explained that once funding for a study was secured he visited with Harris County Commissioners to explain his long-term goals of providing a public utility in older, low income neighborhoods. The county is not going to go into the water business, but they have been extremely cooperative and have worked diligently to find a way to achieve the goal of providing water and sewer in our neighborhoods that need service, said Rep. Bailey
The residents learned that Harris County applied for and received a $395,000 grant to pay an engineering company to design the water and sewer system.
The original plan was changed after groundwater contamination was found on the east side of the Eastex Freeway at the site of the old Aspen manufacturing Company.
The plans had to be changed to get the water from somewhere else. Since Sunbelt Fresh Water Supply District is so close to North Houston Heights, they were asked if they could provide water. They agreed to provide water and sewer treatment, if Harris County and the East Aldine Management District would pay to expand their system so they could supply water and sewer service to the neighborhood.
The expansion to the systems cost $976,000 and is currently in progress.
Construction materials for the next final phase of the project have already been purchased and are in storage but funding for the final phase of construction is still needed.
According to Bailey several changes have been made to state law to enable the project to move forward, the most recent is House Bill 1314 that he wrote that took effect Sept. 1.
The legislation protects projects to install water and sewer infrastructure in unincorporated communities that are either impacted by severe adverse economic conditions or named superfund sites that can have a positive impact on the quality of life of community residents. The change in law will allow the project to proceed without securing certification that typically would cost about $100,000 and take a year to complete.