Deputies kill fugitive after chase ending on US59 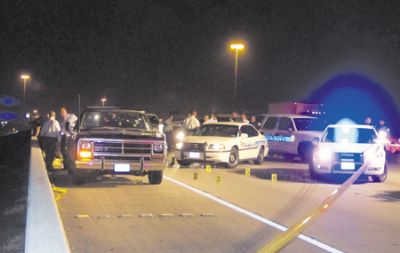 By Gilbert Hoffman, NE News
Sheriffs deputies and a multi-agency task force combined to track and kill a wanted fugitive last Tuesday night.
Roy William Hooper had been sought after he was identified as the suspect in a fatal shooting of Thomas Ford at a robbery at a party last week on Cypress North Houston.
The task force located Hooper at a house near Foy and Little York, about 5 p.m. Tuesday, in Northeast Houston, and when he tried to escape with another man in a black pickup truck, they asked Harris County sheriffs deputies, also on alert in the area, to pursue the men. After a 20 minute chase through city streets, the truck was stopped on US59 north of Lauder Road.
Hooper emerged from the truck with a gun in hand, and three deputies fired about 30 rounds at him, Lt. John Martin told the Northeast News. Hooper was taken to Ben Taub, and pronounced dead. The driver was arrested, unhurt. The freeway was partially closed for about 4 hours during the investigation.