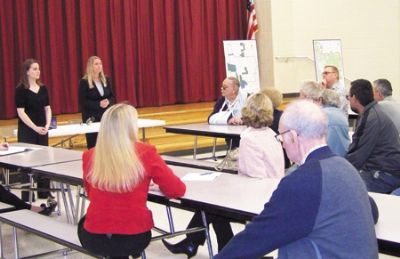 AIRLINE DISTRICT The public got to ask more questions, and hear an update on the status of the engineering study that is being conducted in the District, as a necessary step to get funding for new water and sewer lines for most Airline District properties.
The meeting was last Thursday evening, at Carroll Academy on Gulf Bank, in the district. About 150 persons, most of them residents, turned out to listen and express themselves on the subject.
Speakers for the evening included State Representative Kevin Bailey, Melissa Hamous of Harris County, who is in charge of the study, and Airline Exec. Director Teri Koerth. Also present as observers were district board members, and Kathleen Garrett, a representative from the Texas Water Development Board, the state agency that will eventually okay the funding for the project.
Hamous said that this is a 30 year study meaning that all the improvements might take that long to be realized. But she said that some of the work would start much sooner, as funds and grants were received. She pointed out that grant money is required to accomplish the work, since the county and the city will not pay for utilities. She pointed out that in the East Aldine Management District, after about 4 to 5 years the first sewer project for 100 houses has been completed, and two other project areas are set for construction this year.

Hamous said that preliminary information from the study indicated the extent of the problem, as follows:
 Septic overflow has occured in 477 reported cases, or citations, since 1991.
 Half of the properties in the study have private sewers, and just under half have private water wells.
 About 1 of every 8, or 12% of the septic systems, are failing and this rate will increase with time.
In the public discussion, it was noted that septic systems do not function well in the soil that Harris County has. There is too much clay for good absorption to occur.
At present, it looks like water and sewer will cost about $50 per month per home for the new system.
Some speakers in the audience thought that a solution might be to ask the city of Houston to annex the area. Although this would increase residents taxes and water bills, at least the city was seen as a dependable source to solve the problems.
In other comments, Hamous said that fire hydrants would be included in the construction.
Although flooding reduction is not part of this sewer study, she pointed out that other agencies are in the process of studying flood reduction, and some work has already been done.
This was reported in the Northeast News las week, with retention lakes built in Keith-Wiess park.
For more information and updates on studies and meetings, Teri Koerth suggested checking with the district website at www.airlinedistrict.org, and notices in the Northeast News.
The next regular district board meeting is Thursday, Jan. 31 at 11:30 a.m. in the Little York VFD building. The public is welcome.
Another water and sewer meeting will be held in a few months for the next update and conclusion of the study.