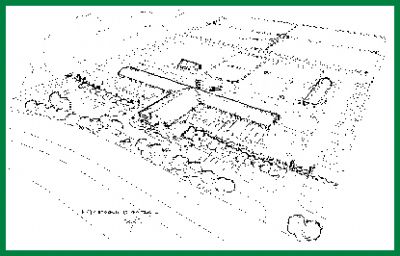 By Gilbert Hoffman
NORTHEAST The Houston Police Departments Mounted Patrol Division will soon occupy a new facility they are building at the northwest corner of Little York Road and Hirsch Road.
According to details released by the department, Assistant Chief Vicki King said that the project will be completed in about a year, and cost about $7,600,000. It has been in the Capital Improvement Budget of the City of Houston since 2004. It will replace the existing facility on the West Loop, which will move due to space requirements and the fact that the land was donated with restrictions that are now necessitating the move.
The project consists of a complex of buildings on a 10 acre site that is now wooded and not used. It sits in the unincorporated portion of the county, not the city. Some local residents have objected to the facility, because it is not residential and because it was not subject to any prior announcement or hearings regarding the use of the land. Assistant Chief King has met with the nearby Armstrong Acres Civic Club, to explain the project and answer questions and objections, she said.
Planned for the site is an administrative building, with offices, meeting rooms, and lockers for the officers. Behind that will be a horse barn that can hold 46 stalls and horses, a veterinary area, and support areas. A covered show arena, with bleacher seats for the public is also planned.

Lt. Wallace, in charge of the Mounted Patrol, explained that the public is always welcome to visit the unit, and he said that it is not unusual to have 300 visitors a day come to see the animals and the divisions activities.
Chief King explained to the Northeast News that the design of the building will include attractive landscaping and fencing, and that the public will be able to use some of the meeting rooms.
Also included will be a Kennel building for the departments K-9 corps, and parking for horse trailers.
Site development will include fields or paddocks for the animals to exercise and graze, water tanks, public parking and staff parking.
Chief King pointed out that the site has been wooded, with drainage problems for years, and that this development will make it more attractive and healthier. In addition, area residents will have an opportunity to see the workings of the animal division that they might not have been aware of.
The buildings were designed by 3D/International, architects, and the construction contract was let in November 2007 to Prime Contractors, Inc. who just recently began to clear the land and prepare for building. It is expected that the facility will be in use by January 2009, and the department will move from its 3 acre site on West Loop to the new location.