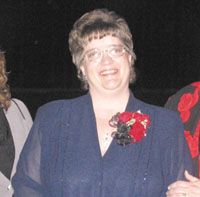 ALDINE Harris Academy Librarian Dixie Allen has been named the Sam Houston State Universitys Distinguished Educator of the Year for her role as a support professional in a school setting.
Allen was recognized for her outstanding contributions not only at Harris Academy but also in the Aldine school district and Texas Library Association.
Dixie serves as a magnificent librarian at Harris Academy and has an innate love for children and literature, said Dr. Margaret Byrd, Area Superintendent for the Carver Vertical in Aldine. She possesses a kind, maternal nature and gracefully entwines the use of books and literature to enrich our young childrens minds.
The awards banquet offered a grand opportunity to recognize Dixie along with the four other recipients who were recognized for their work as classroom teachers, administrators, and community support.
The entire Library Science Department was there to cheer Allen on along with her family, her Principal Kathy Bacy, retired Principal Connie Leday and her husband Frederick.
In addition, Aldine Superintendent Dr. Wanda Bamberg and a healthy contingent from Central Office came in recognition of Dr. Jamie Bryson, Director of Financial Services, who received the Administrator Award the same evening.