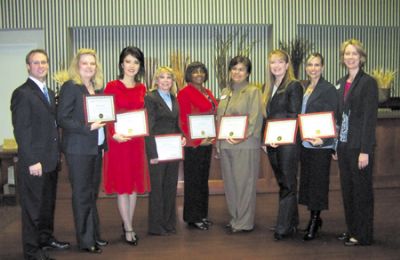 GREENSPOINT The monthly chamber luncheon was held at the Sam Houston Raceway Park, and this exotic setting was perfect for a special presentation of awards and recognition to a group of women that have been successful in the business world.
The Keynote speaker was Lina Lawson, national president of the American Business Womens Association, and with her twin sister Tina, the owner of a design firm in Bryan. Her talk emphasized that many of these women were ABWA members, an organization that can offer support, training, networking, and leadership training.
She also mentioned, as did many of the women in their acceptance speeches, that they had the support of a team, and spouses, to achieve their goals and success stories.
Receiving recognition at the annual luncheon were:
Sally Bradford, Greenspoint Redevelopment Authority; Ann Franklin, Elvin Franklin Insurance Agency; Christy Wussow Hawkins, ExxonMobil; Jocklynn Keville, Greenspoint District; Gigi Lee, Houston Airport System; Tera Lightsey, Houston Marriott North Greenspoint; and Marilyn Sander, ProAction Careers.