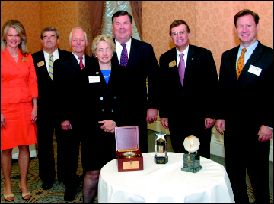 The North Houston Association (NHA) presented the awards for year 2007 to recipients who were recognized at the Annual Awards Luncheon on May 20. City of Houston Mayor Bill White and Controller Annise Parker were speakers at the event.
The following presentations were made: North Star Award to State Senator Tommy
Williams, District 4; Compass Award to Joe Adams, Vice President of Public Affairs for
Union Pacific Railroad Company; and Environmental Impact Award to Land Tejas Companies, accepted by company president Patrick Bullard.

The North Star Award is presented to an individual or company in north Houston that has made a long-term, significant contribution to the region. The award was presented by former Senator and NHA president Jon Lindsay to State Senator Tommy Williams,
District 4. Mayor Bill White made accompanying remarks along with Senator Williams. Our
Board felt that Senator Williams was qualified for this award based on his years of work and resulting legislation enabling creation of The Woodlands Township. He obtained approval through the State Legislature for a piece of history-making legislation that would allow Town Center Improvement District and the City of Houston to enter into a regional participation agreement, thereby ensuring that The Woodlands would not be annexed and allowing the citizens to determine their future governance.
The Compass Award is bestowed on an individual who is a member of the North Houston Association, and has made a significant contribution to the area and to the programs and projects of the Association. The award was presented by NHA Chairman Roy Hearnsberger, with The Hearnsberger Company, to Joe Adams, Vice President of Public Affairs for Union Pacific Railroad Company. Our Board felt that Mr. Adams was qualified for this award because of his outstanding leadership to NHA as the Chairman of the Board from 2002-2006. Additionally, he has participated for many years on various NHA committees and provided updates to NHA membership on freight rail issues and commuter rail possibilities for the Houston region.
The Environmental Impact Award recognizes a company or entity for its efforts in preserving and protecting the environment in north Houston or south Montgomery County. Mark Froehlich, with Brown & Gay Engineers and NHA Board member, presented Land Tejas Companies the Environmental Impact Award for the Discovery at
Spring Trails green development. Patrick Bullard, President of Land Tejas Companies, accepted the award.