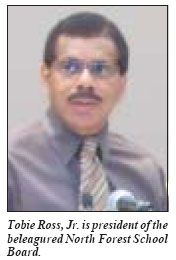 NORTH FOREST  Back to School is not quite the same in this District as most. As the first day of school nears, the Board of Trustees must deal with an order from the Texas Education Commissioner that plans to replace them, and the interim superintendent.

TEA took this unusual action at the end of July, due to three ongoing problems at North Forest, according to Commissioner Robert Scott: Low performing schools that do not meet state standards, financial problems that have not been resolved, and a lack of cooperativeness with the states inplace Conservators.

However, the Board must continue to conduct its business according to law, until the decision to replace them becomes final or is overturned, School Board president Tobie Ross, Jr. indicated.

There are three ways that the ruling could be overturned. Scott has been asked to reconsider, the U. S. Justice Department may decide the ruling does not meet the requirements of the Voting Rights Act of 1965, or the School District might prevail in a lawsuit against TEA.

To pursue the lawsuit, the Board voted last week to hire an attorney to advise them, that is experienced in Civil Rights cases. Anthony Griffin, an attorney from Galveston who has worked previously on a case involving Congresswoman Sheila Jackson Lee, who recently publicly sided with the North Forest board against TEAs actions. Griffin was retained for $50,000 according to reports. He said he plans to file appeals with the TEA and the Justice Department.

In the meantime, the North Forest board is conducting budget hearings, with department heads and comments from the public. So far they have had 3 of these workshop type board meetings, and another one is planned for Monday night, August 18 at 7 p.m.

Information presented so far indicates that the budget is balanced, with reduced expenditures allowing the district to show a surplus of about $4 million, that would allow them to start to repay TEA the $11.8 million that they owe.

However, TEA has asked that the District consider a tax increase of 13 cents per $100 valuation. This would raise another $2 million per year, and allow the debt to be retired quickly. The board has until Aug. 25th to make the decision whether to put a tax increase on the November ballot. This increase would mean about $97.50 more taxes per year, per $75,000 house, and it would indicate whether taxpayers want to help.