Quadruplets are quite a bundle for local family 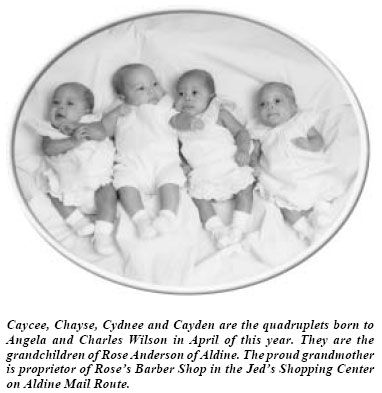 NORTH HOUSTON  Grandmother Rose Anderson, proprietor of Roses Barber Shop on Aldine Mail Route in the Jeds shopping center, has quite a lot to be proud of lately. Her daughter, Angela Bellow-Wilson, gave birth to quadruplets on April 17 of this year.

They were born at Womens Hospital of Texas, and each baby had to have a special team of doctors and nurses assigned to the delivery, to insure that everything went well, as it did.

The babies ranged in weight from 2 lb 10 oz., the smallest, to 4 lb. 6 oz. the heaviest. Now, over 3 months later, the babies weigh about 13 pounds each, their mother Angela reported to the Northeast News.

Because they were delivered early, by Caesarean, they had to stay in the hospital longer than usual. The first two went home at 3 weeks, the next at 4 weeks, and the last one was kept in the hospital for 7 weeks until some tissue in her neck improved.

There are 3 girls: Caycee, Cydnee and Cayden Wilson, and one boy, Chayse.

The mother had taken some fertility medicine, and the conception was In Vitro, because she had earlier had her tubes tied, she said. However, she and her second husband wanted children, and they decided this was the best method.

Originally, they expected twins, but after a couple of months it was determined they would be triplets, and then one of the eggs split, and they ended up with four babies.

When they first came home, the babies were on apnea monitors, but since there are no problems they now sleep and eat in normal ways.

But they do keep their mother busy, Angela reported from her Tomball home. She has two other children, a boy 19 and a daughter 13.

Grandmother Rose Anderson and the rest of the family help when they can, but mainly they are just proud of such a beautiful group of children.