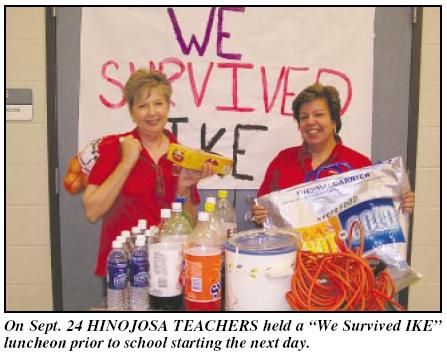 Aldine ISD Spokesman Mike Keeney said that all 70 campuses resumed classes on Sept. 25. Of the 70 campuses, 68 of those returned with power. Only Jones EC/PK and Jones Elementary were forced to resume classes on generator power.

Keeney said that the district was fortunate in that they had no major damage to buildings. The most damage sustained was to the roof of Nimitz, which was repaired within days of the storm and the press box at Thorne Stadium, which has also been replaced.

All North Forest High School students will report to the M.B. Smiley campus for the start of school on Wednesday, Oct. 1. The campus is located at 10725 Mesa Drive.

School will resume at the Oak Village, Thurgood Marshall and Lakewood campuses at such time as power is restored to these schools. District administrators and staff members continue to work closely with emergency workers to get these campuses prepared as soon as possible.

Additionally, there will be a parent meeting for all parents of students attending North Forest High School.