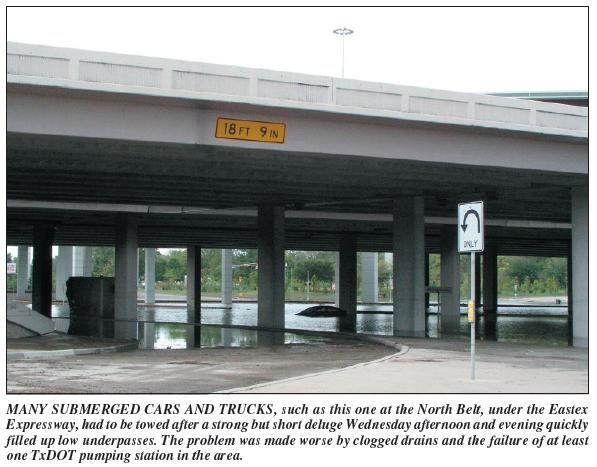 NORTHEAST HOUSTON  Motorists were surprised last Wednesday by a short, heavy downpour that brought 3 to 5 inches of rain to many areas around Aldine and Humble.

At least 12 high water rescues were carried out by Houston and Humble fire departments, according to reports, and a total of 40 persons may have been led to safety.

The rain started in the afternoon, and because of the deluge it quickly filled low areas in the underpasses below Beltway 8 and the Eastex Expressway. As much as 8 feet of water could be seen in some locations, such as where Will Clayton Parkway and Lee Road cross under the highways. Drivers waiting at a stop light saw the waters quickly rising around them. The flooding was made worse by the fact that at least one TxDOT pumping station, near the intersection of US59 and Beltway 8, was overwhelmed and eventually failed. Trash and tree parts accumulated in the storm drains, making the water flow stop and back up. This debris may have been a result of Hurricane Ike, the Harris County Flood Control District said.

As late as Friday, there was still standing water in some of the underpasses, and at least one car was stranded and almost completely covered by water. Contractors were busy at the pump station, trying to rehabilitate it. Tow truck drivers had removed most of the cars they could reach, and drivers who had abandoned their vehicles were facing fines and storage fees of as much as $200.

Besides cars, large pickup trucks and a delivery van were also trapped by the rapidly rising waters.

Some drivers, such as Brenda McCann, left their cars and swam to safety. Others, such as Paul McLaren, stayed inside the car, surrounded by water, all night until it receded enough for him to get away to a dry lane.