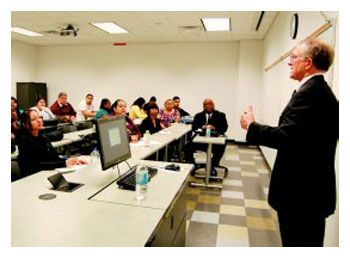 HCC Northeast students listened in as Mr. Chase Untermeyer, former Ambassador of Qatar enlightened them on the day to day operations of the White House.

In a presentation titled, The Call to Public Service: Life in the West Wing, Untermeyer detailed how Washington works and expressed the importance of learning history if considering politics.

The study of history is so valuable, because it gives you an extra perspective. I study history because it tells me things that I didnt know and affirms what know, Untermeyer explained.

The former ambassador went on to say how history tells us what has happened in the past and how decisions may impact us in the future.

The study of history is what aided Untermeyer in his decision making as Special Assistant for Presidential Personnel. Untermeyer was charged with making staff recommendations to the President, which required politics, extensive knowledge of the candidates, and an awareness of those with political power.

I had to know everything about each candidate before making a recommendation. Working in the White House is an important and key position that is very powerful because you are so close to the President, Untermeyer explained.

The former ambassador further explained how some White House staff positions can be more powerful than Cabinet positions, simply because of their proximity to the President.

Students learned about the inner workings of the White House, government job functions, and the challenges and rewards of working there. Untermeyer also highlighted the responsibilities of Ambassadors all over the world. The role of the Ambassador is to deal with issues involving the country that we work for, says Untermeyer.

Untermeyer advised students interested in politics to explore it to see if it is really something that they would like to do. If you are already involved in something that is important to you, you are further along than most. Just the desire and commitment leads to so much more, stated Untermeyer.

He further advised students to get involved in a grassroots political campaign and learn from it. Untermeyer encouraged students to visit the White House for themselves and closed the presentation saying, It is important for us to learn about history in theory, but better to learn about things in person.