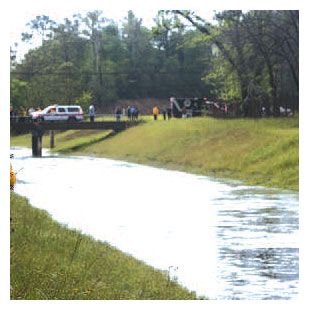 North Houston was hit by heavy rains and thunderstorms on Saturday, canceling many events, flooding streets, and creating dangerous driving.

Authorities reported a family tragedy occurred on Greens Road near Aldine-Westfield as a combination of wet roads, possible driver intoxication, and a cell phone call that detracted him, combined to cause the car that Chanton Jenkins was driving to skid off the road and fall into a flooded drainage canal, which had as much as 9 feet of water depth.

Jenkins was said to be the father of four of the children. The accident happened about 5 p.m., and rescuers found the car in the water about 7:30 p.m., downstream about 100 feet. Two adults and a 10 year old child were able to escape the sinking car, but 5 other children, aged 1 to 7 years, did not get out safely, authorities said.

Houston police and fire departments initiated a search that included boats, infrared equipped helicopter, and divers, but as of Sunday one child was still missing, three were found dead inside the car, and one in the water. Texas Equusearch will help locate the missing child.

HPD spokesperson Dese Smith said Sunday that the driver would probably be charged with intoxication manslaughter.

A record 5 to 6 inches of rain fell in various parts of the county, according to the National Weather Bureau.