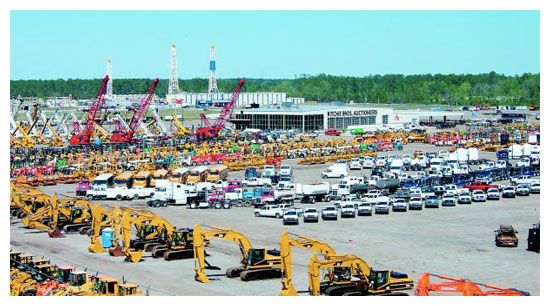 The northeast corner of the intersection of Beltway 8 and US59 has recently been developed with a large open site where industrial and construction equipment is auctioned off monthly, to a group of national buyers.

Ritchie Brothers, founded in Canada in 1958, is the operator of this huge auction, where all types of cranes, backhoes, dozers, trucks, earth movers, forklifts, and other miscellaneous equipment is sold to the highest bidder. The auction sells with no minimum or reserves, which appeals to many buyers.

Ritchie Brothers has been in Houston for a number of years, with a location on the I-10 East Freeway. However, this new location is much larger, and closer to Intercontinental Airport, which eases travel for many of the out-of-town bidders.

Ritchie Brothers is the world’s largest auctioneer of idustrial equipment, according to their press releases. The operate in over 110 locations in 25 countries. The sell, through unreserved auctions, used and unused industrial assets including equipment for construction, transportation, marine, material handling, mining, forestry, petroleum, real estate and agricultural industries. In 2007 their volume of business was $3.18 billion dollars.

In the middle of the site is a large building with offices and an auditorium seating several hundred bidders. One wall of this building opens, and equipment is driven past the bidders during the monthly auctions, which sometimes last several days. Bidders can also use the internet, at rbauction.com, to see and bid if they are not able to come to the site.