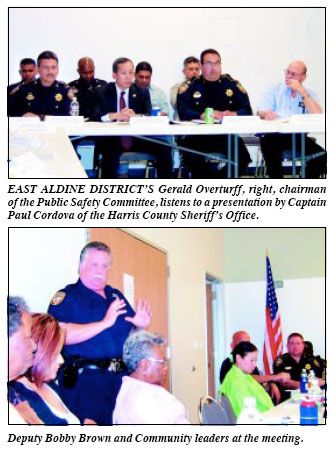 NORTHEAST– The East Aldine District sponsored an unprecedented meeting last Tuesday night, between representatives of local law enforcement agencies, and leaders of the civic clubs and associations in the District.

The purpose of the meeting was a two-way conversation between the parties, to discuss law enforcement concerns of the community, and an explanation by the public safety officials and the District’s officials, about what has been accomplished and what plans are to be implemented in the future to reduce crime.

The meeting was lead by the District’s officials, including Gerald Overturff, chairman of the Public Safety Committee, Clyde Bailey, EAMD chairman, and Richard Cantu, on-site Director of Services for the District. Also present were Shirley Reed of the Committee, and Marie Espinoza and Reyes Garcia from the District’s board of directors.

Please see print edition for more details, including specific concerns from each neighborhood.