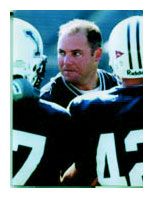 HOUSTON—At its monthly board meeting on May 18, North Forest ISD’s Board of Managers approved the appointment Shawn Halloran as the new athletic coordinator and head football coach for North Forest High School.

Halloran is a former quarterback for the Boston College Eagles and St. Louis Cardinals. Before joining North Forest ISD, his most recent position was as an assistant coach/special teams coordinator for Yale University, where he worked to reestablish Yale’s recruiting base in Texas and helped the team to a 9-1 season in 2007 and a second place ranking in the Ivy Finale Standings.

Halloran says that while recruiting in the state of Texas he has become familiar with the importance of high school athletics and a successful football program in the community.

Leading and coaching a winning team is important, and Halloran says his coaching approach will also focus on discipline, pride, character, commitment and loyalty to achieve this goal.

“Through the mastery of these skills, I feel each team within North Forest will be successful,” he said.

NFISD Superintendent of Schools Dr. Adrain Johnson said he is certain Halloran will be an asset to both the District and the athletic program.

“Shawn Halloran has 18 years of coaching experience at various levels,” Dr. Johnson said. “He knows what it takes to build and maintain a relationship with student athletes and inspire them to not only compete at their very best level, but to approach life with that same dedication and zeal; and he has arrived in North Forest with a plan to strengthen our program and a commitment to seeing it through.”

Halloran began his coaching career as a graduate assistant at Boston College and later was an assistant coach at Worcester Polytechnic Institute. From 1993-1997 he was Georgetown University’s offensive coordinator. From 1997-2002 he was Yale’s special teams coordinator. There he coached Yale’s all-time leading kicker, punter and punt returner. Under his tenure, the Bulldogs won the 1999 Ivy League title.

In February 2006, Halloran was named offensive coordinator of the University of Pennsylvania Quakers. After one season with the Quakers, Halloran rejoined Yale as an assistant coach in May 2007.