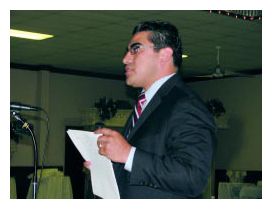 Editor’s Note: This is the second part of an article and interview with first term State Representative Armando Walle, District 140.

Walle went to Austin in January, but it was several weeks before committees were assigned, and work began. In the meantime, caucuses met and acquaintances were made, and some orientation for freshmen legislators took place.

Walle was assigned an office in the new underground wing, a well appointed addition to the existing capital, and much better than some of the basement offices that previous legislators had to use.

His committee assignments were to Human Services, where he worked on hearings for bills about aging, childrens health care, CPS and more; and Urban Affairs, which included hearings on housing, weatherization programs, and other urban issues.

In part one of this article, we detailed the bills that Walle helped write and pass, including the Grafitti Bill, which increased penalties for grafitti offenders and amended definitions of grafitti; two Fire Fighter Bills, granting a paid holiday on 9/11 to firefighters in honor of their brave sacrifices, and a bill on grievance resolution; an amendment to direct TEA to study high drop-out rates of students with low English proficiency; and an amendment to direct the DMV to require diversity training in their customer service ranks.

In all, Walle authored or cosponsored 9 bills, of which 3 went to the governor for approval. He worked with local legislators such as State Senator Mario Gallegos on bills of interest to his constituents. Others in the Houston delegation included Sylvester Turner, Bill Baligari, and Senfronia Thompson. Bills that Walle filed, but did not get action or pass, included a bill limiting junkyards; two bills limiting utility water rates, one stating that rates could not rise more than 20% in a 3 year period, the other that a local hearing was required before rates could be acted on by TWDB; and a noise ordinance. Walle expects all of these to come up again in the next session, with better results.

This legislative session did present a balanced budget to the Governor, in the amount of $180 billion dollars. However it spent a lot of time on the Voter I.D. issue, without resolution.

Walle sees small steps of accomplishment in some of the legislation that was acted upon. In summary, he points to his Grafitti bill; the defeat of the Voter ID bill, which would have disenfranchised many minorities and others; Tier One Universities will be fostered with new legislation, and the Top Ten Percent regulation will stand for now, but UT Austin will open up more slots for excellent students; an expanded Texas Grants program for qualifying families who need financial aid; School Finance Reform will improve reimbursement formulae by using federal Stimulus dollars, and also grant teachers a minimum $800 raise; Windstorm Insurance funding was approved; $180 billion budget increased health, human services and education programs, without a tax increase by using federal stimulus dollars; Small Business Tax Relief was increased. Walle cited some “missed opportunities” as CHIP not being expanded; Unemployment compensation was not acted on properly; Tuition to universities was not capped; TDI/Insurance department was not acted on to limit high rates; Utility Rates were not held in check; Medicaid Reforms/12 month applications were not enacted.

Walle may be called back by the Governor into a special session, to deal with some of the issues that were not resolved. In the meantime, he is making plans to enter Texas Southern University and work on his Law Degree.