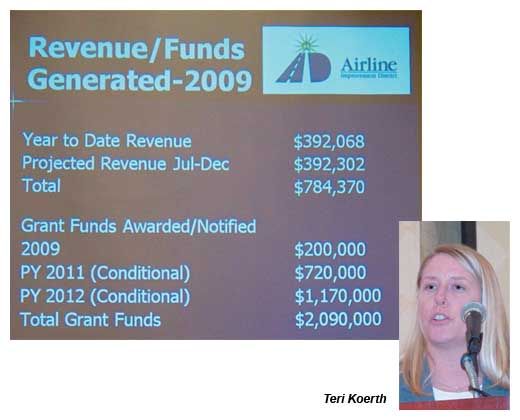 Airline District is headed by Executive Director Teri Koerth, and was formed in September 2005 by House Bill 1458. It comprises an area of 3.5 square miles, and has approximately 16,000 residents.

It is supported by a 1% sales tax. Koerth presented a chart which showed that the projected income for 2009 will be $784,000. She pointed out in the slides that since this is a relatively small amount of income, it is necessary for the District to stretch this money by seeking grants and partnerships with other entities. This includes the state, county, and other Districts.

Accomplishments include Public Safety with 3 full-time deputies, and a shared Nuisance Abatement officer with Greenspoint District.

Other projects include installing 92 streetlights on Airline Drive, and a continuing Graffiti Abatement program that will clean 600 sites this year, at no cost to property owners.

A Water/Wastewater Study has been completed, which is necessary to apply for grant funding. The District will also get its first Public Park in the near future. A 10 acre site has been acquired and will be developed.

Although Airline is often thought of as comprised of small businesses, Koerth pointed out that UPS has a large terminal on Sweetwater, and employs 1700 people there.

However, a major characteristic of Airline is the weekend flea markets, attracting 40,000 persons each weekend. Due to the traffic problems this creates, a traffic study is underway to solve this and provide better emergency access.