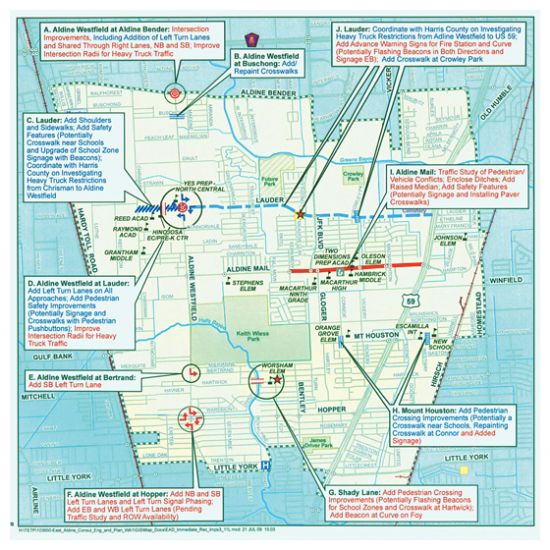 The East Aldine District heard a report last Tuesday night at their board meeting from their mobility and urban design consultants, regarding plans for improvements. Consultants making presentations included Thad Kudela of the landscape firm Kudela and Weinheimer, and David Millikan of the planning firm Wilbur Smith Associates.

The improvements come as a result of the recent bond sales. Proceeds from this sale have been set aside for the construction of the following: Trails and sidewalks, $784,000; Signage and monumentation, $1,666,000; Landscaping $2,200,000; and Mobility improvements, $3,837,000. In addition, other monies from the bond sale were set aside for sewer and water improvements in several project neighborhoods.

Kudela showed exhibits of improved safety around the schools, with new sidewalks and trails. Next, he showed examples of signage, some directional or informational, and some used for “branding” of the district. New landscaping will be added too, he said, showing examples of trees in medians, starting with JFK.

Millikan talked about mobility improvements, including increased turning radii at some intersections that now have large trucks turning, widening of Lauder Road at the intersections, and improved conditions for pedestrians with better crosswalks Many of these improvements are illustrated in the accompanying map.

Clyde Bailey thanked David Hawes of HHCLLP, for his work in negotiating a favorable rate for the bond sale that was just completed. Bailey said that the lower rate that was achieved will eventually save the District about $12 million in interest payments over the life of the bonds.

During the review of the financial report, it was noted that for the first time since sales tax was collected for the district, there was a slight decline of 1.6% in the total monthly receipts.