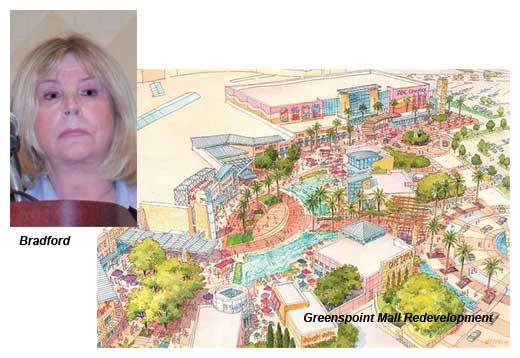 The Greenspoint Redevelopment Authority is headed by Sally Bradford, Executive Director, and is charged with developing projects in the public areas. They currently have 12 projects underway or completed since 2003.

These include Benmar Bridge, Greenspoint Drive Bridge, Buckboard Park, and improvements to Greenspoint Drive. This will include a 16’ tall sculpture in the median, by artist Kevin Mock. The redevelopment project to add theaters, restaurants, and outdoor water features and shops to Greenspoint Mall is now under review by the City, and construction is anticipated within 60 days, Bradford said. Included will be a 20 screen movie theater, and a sports bar named GlennLock, after Aldine professional football player Aaron Glenn.

In conjunction with the Flood Control District, a new recreation park is planned near Greens Road, with 16 soccer fields, including 8 that are lit at night. A major new feature will be a Skate Park on Kuykendahl, with 10.23 acres. This will include the city’s largest skateboard park, and a “park without boundaries” a new concept for those who are physically challenged but want outdoor recreation.

Airline Drive is also scheduled for 5 blocks of improvements, including art, parks and plazas. Bradford said that a new city fire station is scheduled for Gears Road on a 10 acre site that might eventually include police, and a fitness park. In all, $25 million in work is planned for 2010, and $30 million for 2011 she said.