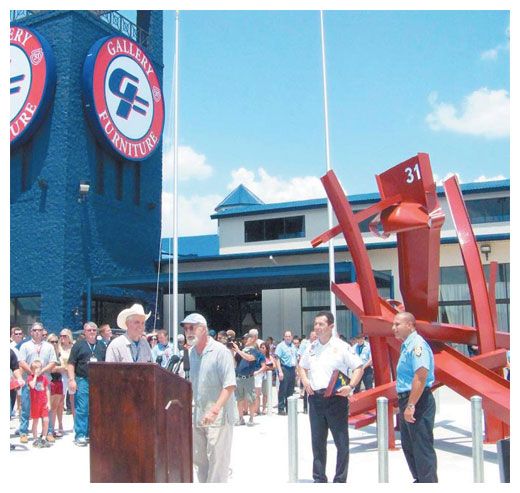 After the devastating fire that destroyed his warehouse, and damaged most of the furnishings in his main showroom on I-45 North, Jim McIngvale vowed to reopent for business on July 4th at the main store location, and he followed through with that promise this week.

The total devastation has been estimated at $20 million dollars, and the fire officials have said that the cause of the blaze was intentional arson, but they have not yet said who was responsible or why.

Gallery Furniture commissioned Bob Mosier, a sculptor who also teaches at The John Cooper School, to design and construct a permanent memorial to the fire department’s efforts. The sculpture is made of twisted steel beams from the damaged warehouse, welded and painted into an uplifting shape. It has been installed near the entrance to the store.

McIngvale had received much support and praise from the community since the May 21 fire, and he in turn has thanked all those, and especially the Houston Fire Department, for their help in containing the blaze to only the warehouse behind the main showroom.

Much of that showroom has now been cleaned and restored to new condition, in spite of heavy smoke and water damage from the fire fighting effort. McIngvale and a team of designers have added new features to the showroom interiors, and these were on display at the grand “re-opening” on Saturday, July 4th. These include a new Mango Grove with exotic birds and monkeys in residence; the permanent firemens’ sculpture, a new home theater display, and a new Tempur-Pedic Room.