Aldine-Mail Route to be widened to 4 lanes 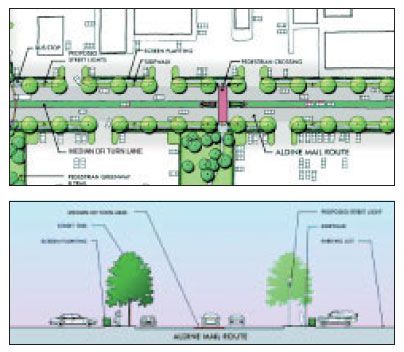 At their recent board meeting in July, the East Aldine District heard a report on progress in the widening of Aldine-Mail Route, from Airline Drive to Aldine-Westfield Road.

Representatives of Wilbur Smith Associates reported that the 7 lane bridge over the Hardy Toll Road is 90% designed, with construction by the Toll Road Authority planned to start by the end of the year, or the first quarter of 2010.

The report included a summary of a meeting held on June 23 between county officials, consultants, and representatives from the district, including David Hawes, Richard Cantu, and Scott Bean. At that meeting, Larry Allen of the Harris County Public Infrastructure Department, reviewed the plans for Aldine Mail Route between Airline and Aldine Westfield. In this section, Aldine Mail Route will have two lanes in each direction, with a median and concrete curb and gutter.

The engineering plans are in final design, and should be completed within 5 months, he reported. Construction would start next year. Precinct 1 is funding the project, which will cost about $16 million dollars.

The project is planned to provide an excellent connector to the Hardy Toll Road and Hardy Road, and will improve mobility all along Aldine Mail Route. Most of the construction will be in existing right-of-way, but in some areas an additional 10’ of width will be required.

Existing sidewalks will be replaced. East Aldine District will plan on new monumentation or signage, and landscaping.