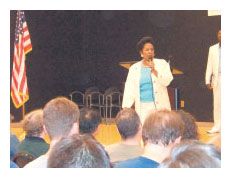 Shouts of “JUST SAY NO” were met with equally intense shouts of “YES WE CAN” many times through a marathon Town Hall meeting that Congresswoman Sheila Jackson-Lee held last Wednesday night at the Northeast Multi-Service Center on Tidwell.

An overflow crowd of almost 400 came to give their opinions or ask questions, some politely and some rudely and raucously. Through it all, Jackson-Lee did an excellent job of moderating and keeping the crowd civil. She listened and answered almost 40 speakers who lined up to make their points, or ask about the health care legislation.

Order was maintained through her cajoling and appeals to the crowds patriotism, as well as by a heavy police presence by the Houston police department. The latter was probably a response to unruly behavior that has occurred at other recent Town Halls held in various congressional districts in the Houston area, and throughout the nation. It is apparent from the large responses, and the sharp questioning, that this issue of Health Care reform is important and sensitive to many citizens.

Jackson-Lee’s message was that we need reform, and she backs the president’s initiative in this bill. However, she pointed out that it is not final, has at least five versions, and will come out differently than now drafted. She also said it was about insurance for those who don’t have any or need less costly choices, and not about clinical health treatment from your doctor or hospital.

She said that the government has been trying to improve health care for 60 years, and this is an important opportunity this year. She cautioned that if the bill is not passed, private insurance will continue to increase, perhaps as much as $1800 per couple per year, every year in the future.

Questions from the floor ranged from continuation of private coverage, whether congressmen were reading the bill, where the money would come from to pay for the reforms, whether end of life discussions would lead to early demise of the elderly, how small businesses would get better coverage, whether illegal aliens would benefit from more health care coverage, whether abortions would be paid for in the new program, whether some hospitals that need financial help would receive any, whether the health care system can absorb and properly treat an influx of additional patients, who will make decisions on treatment options, and how can the VA system catch up with their case load.

Jackson-Lee managed to answer most of these questions, although not always in a manner satisfactory to the audience. She closed with a summary that she was here to listen, that the billl was not final and still being rewritten to adjust to the many public comments, that this was about insurance and not medical procedures, and that it was important to get an many uninsured people into the system as possible, and this bill was the way to do that.