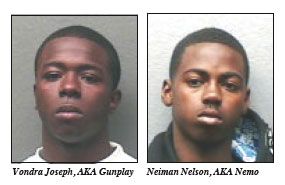 Charges have been filed against one of three suspects believed responsible for the fatal shooting of a man at the Siesta Food Mart, 390 Aldine Bender about 10 p.m. on Aug. 31. A second one is in custody, according to HPD.

One suspect, Dontreal D. Brown, 18, is charged with capital murder in the 184th State District Court. Brown, currently in custody on an unrelated aggravated assault with a deadly weapon charge, is accused in the killing of Joe Fernandes, 54, of Sugar Land.

Fernandes suffered a gunshot wound and was pronounced dead at the scene. Another persons of interest, Vondra Joseph, 20, is being questioned. Neiman Nelson is wanted for questioning in this case.

HPD Spokesman Victor Senties said that a person of interest was interviewed on Sept. 8, but that no additional arrests had been made as of press time. HPD Homicide Division Senior Police Officers T. W. Miller said that three unknown male suspects dressed in dark clothing entered the Siesta Food Mart at 390 Aldine Bender and robbed the store clerk, Fernandes, at gunpoint. At some point during the robbery, one of the suspects fatally shot Fernandes. The three suspects then left the store and got into an older model, gold or tan four-door vehicle parked on the side of the store in the 15900 block of Cotillion Drive. The suspects were last seen driving southbound on Cotillion Drive.

“Further investigation developed information that identified Brown as a suspect in this case, Miller said. “Brown admitted to investigators his involvement in this case.”

Anyone with information on the whereabouts of the wanted male is urged to contact the HPD Homicide Division at 713-308-3600 or Crime Stoppers at 713-222-TIPS.