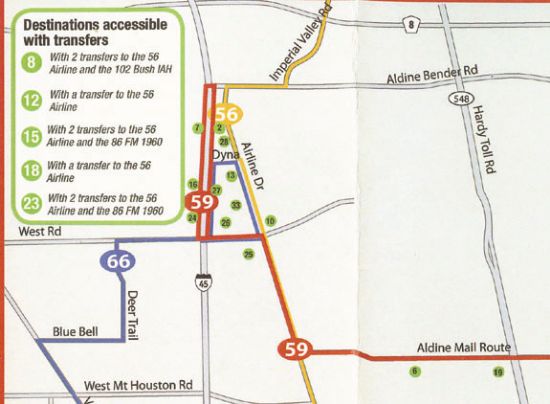 NORTHEAST – METRO announced this week that the route for the #59 bus has been changed to include the stores on the west side of the North Freeway near West Road.

METRO representatives Karen Marshall and Art Murillo have led a task force that included the East Aldine District, the office of State Representative Armando Walle, citizens groups, and METRO representatives. They have been working for months to improve service on the Route #59 Bus that travels along Aldine Mail Route and Airline Drive.

This route serves a number of important stops, but due to low ridership if was threatened with cancellation last year. A subsidy from the East Aldine District has kept it running through the end of 2012, and if ridership can be improved, METRO says it will continue beyond that date.

However, citizens’ groups have complained that ridership is low for two reasons: it does not run on weekends, when many people use it for shopping, including the flea markets on Airline, and it does not reach major stores such as Walmart at West Road and vicinity.

METRO said they had constraints on equipment and time schedules that made it difficult for them to extend the route, but after a number of meetings and strategies to rework the conditions, they agreed to change the route to include the frontage roads on the east side of I-45 from West Road to Aldine-Bender, and then down the west side from Aldine-Bender to West Road and then back to Airline.

In addition to numberous stores which now include Walmart, Home Depot, Best Buy, Fry’s, and the Dump, there are several pharmacies such as CVS and Walgreens on the route.

Other important agencies serviced include the Social Security Offices, the Harris County Aldine Community Health Center, the Aldine WIC, Aldine CTC, and the YMCA Aldine-Greenspoint offices on the North Freeway. Additionally, two public libraries, High Meadows and Aldine Branch are on the route.

Sports and social venues that are on the route include Primavera and Azteca Park on Aldine Mail Route.

Food supermarkets that are serviced directly on the route include Kroger’s, Food City, Fiesta, and Walmart. Hardware stores include Jed’s and Home Depot.

Another important aspect of this route is the ability to transfer to other routes such as 6, 83, 56, and 66. These are shown on the map accompanying this article. By transferring once or twice, riders can also reach other stores and employment centers, such as St. Anthony’s Hospital, Bush Intercontinental Airport, Airline Flea Markets, Greenspoint Mall, Northline Commons, Houston Northwest Medical Center, and Willowbrook Mall.

The new route started Monday, August 27 and will continue indefinitely. METRO plans a demonstration ride for the committee, and the public, on Friday August 31, starting at the Social Security stop on Aldine Mail/US59 at 12:06 pm and reaching the Walmart for a special stopover, and then returning at 1:00 p.m. from there.