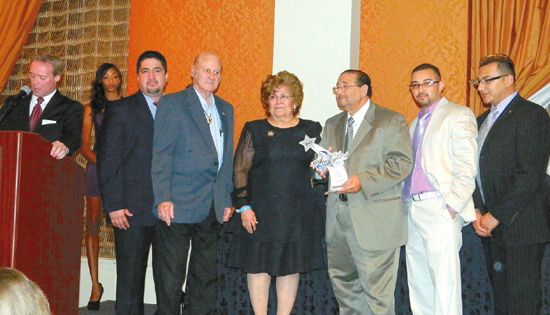 GREENSPOINT – The Houston Intercontinental Chamber held their annual Business Awards banquet last Thursday night, and the format included the Chamber’s awards categories, and this year seven businesses that were chosen by the four participating management districts.

The evening started with Congresswoman Sheila Jackson Lee swearing in the new Board Chairman, Linda Mercier, and Appreciation Certificates for the Chamber and the board.

This was followed by a sometimes humorous presentation of the accomplishments of the Chamber over the last year by president Reggie Gray, covering new business relationships both local and international, monthly meetings and special programs and forums, and a long list of government and business leaders that have met with the Chamber for mutual benefit.

Gray also outlined future events for the Chamber in 2012 and 2013. These include a Health Care Summit in November, and an Economic Forum in January, as well as monthly cultural events with Authors, Artists, and Museums. He also forsees providing Tours and Travel planning for chamber members and joint trips.

To the entertainment of the large crowd, Gray presented some of this and later awards in various foreign accents.

Noble Energy was the major title sponsor of the banquet, along with 24 other companies and chamber members.

Management Districts that presented Awards to businesses in their area included Rebecca Reyna of Greater Northside Management District, Business of the year to Jose Jimenez of State Farm Insurance; Teri Koerth of Airline District to Custom Vans and UPS, with remarks by Mark Cross and Roger Brown; Richard Cantu and Gerald Overturff of East Aldine District, to Jose and Gloria Del Santiago for El Peon Restaurant, and Enrique Morales for Kroger Supermarket; and Jocklynn Keville of Greenspoint District to Darin Spears of Fibertown and Larry Bundy, Corey Briggs and Kelly Harvey of Hyatt Houston Hotel.