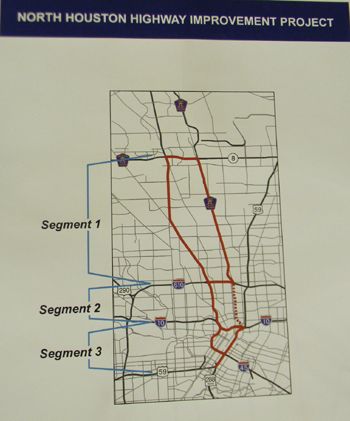 Eight preliminary alternatives were presented for this area:

Last meeting purpose was to present and gather people’s input on the preliminary alternatives as well as to discuss the project and answer any questions.

Raquelle R. Lewis, public information supervisor and special projects administrator with the Houston District said that criteria and alternatives must be evaluated to meet the goal.

According to a document by the North Houston Highway Improvement Project, “Transportation improvements are needed within the IH 45 project area because the existing IH-45 facility currently experiences undesirable levels of congestions during peak and off-peak periods. Increased traffic on IH 45 from expected future regional population and employment growth would further increase the congestion already being experienced in the project area.”

In a study, the North Houston Highway Improvement Project found out that improvements to the portion of IH 45 extending from near downtown Houston northward to Beltway 8 North are needed because of several reasons:

The road does not provide adequate capacity for existing and future traffic demands, resulting in congestion, longer travel times and reduced mobility.

The one-way reversible HOV (High Occupancy Vehicle) lane serves traffic in only one direction during the peak hours and is unused for large periods of the day, limiting its use.

IH 45 is a designated evacuation route for the region; at its present capacity, its effectiveness would be limited in case of a hurricane.

Portions of the IH 45 do not meet current roadway design standards, creating a safety concern.

The North Houston Highway Improvement Project involves evaluation of the highways in the three segments and identify areas of concern and implement an integrated system of transportation improvements that would manage traffic congestion in the IH 45, provide expanded transit and carpool opportunities, expand roads for emergency evacuation; in one word, a solution to all deficiencies cited above.

It’s expected that by 2016 a Record of Decision should be completed. Environmental impacts will be also evaluated for the recommended alternatives that meet the purpose of the project and then a preferred alternative will be selected, including a no build alternative.

Public can submit their comments by Friday, October 26, 2012 via mail to:

or via e-mail to:

Your input is important in this phase of the project.