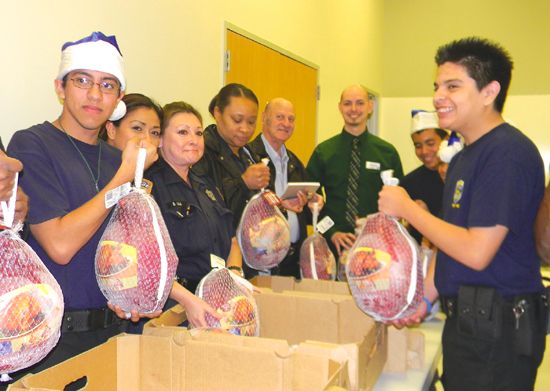 For the event’s tenth anniversary the HCSO and CPA provided food baskets to 55 underprivileged families. The baskets consist of a complete Thanksgiving meal, including a turkey with all the trimmings, beverage and dessert.

The idea originated with Deputy Grace Luna back in 2002. She received a call from an area school teacher asking her for help with a little girl who was showing up to school with ragged clothes. When Dep. Luna delivered new clothes to the child she was told by the school counselor there were many more in similar situations whose family didn’t have much money for food much less for clothing.

Deputy Luna enlisted the help of fellow storefront deputies and members of the Citizens Police Academy in that area and began putting food baskets together. They started with about 5 or 7 families and the number has grown every year.

Family names are given to Deputy Luna by school counselors and Harris County deputies that patrol the East Aldine area and east Harris County.

This event is also sponsored by the generous donations from Walmart, Kroger, HEB and the East Aldine Management Team.