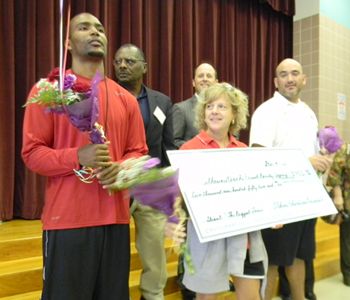 The Aldine Education Foundation (AEF) “Surprize Grant Patrol” made their presence felt loud and clear when they arrived at five Aldine ISD schools on Friday, Dec. 7 to award AEF’s first-ever teacher’s grants. Using tambourines and noisemakers, the “Surprize Grant Patrol” descended on Eisenhower High School, MacArthur Ninth Grade School, Thompson Elementary School, Wilson Intermediate School and Shotwell Middle School to deliver grants totaling $6,555. The first stop was at MacArthur Ninth Grade School where physical education teachers Cathy Roach, Ermid Benitez and Jeremy Broadway received a $2,952 AEF grant to fund their “Biggest Loser” competition. The “Biggest Loser” competition will serve as the monitoring tool where MacArthur Ninth students will see visible changes and manage their fitness goals. Next it was on to Thompson Elementary School where teachers Teana Cardin, Nabil Mahboubi and Kelly Sadler received a $603 grant to create an outdoor classroom that will include a human sundial, an interactive clock and a weather station to incorporate math and science TEKS in a hands-on environment. The AEF noisemakers then headed to Wilson Intermediate School where they delivered a $1,000 grant to teacher Clarissa Taylor. The grant will provide funding for Taylor’s program to increase student literacy and achievement in reading through the implementation of e-readers in small-group workstations within her ELA classroom.

The next stop was Shotwell Middle School where music teacher Michelle Womack received a $1,000 grant that will help her to form the first madrigal singing group in Aldine ISD. While at Shotwell, Womack’s choir students performed for AEF members. The final stop of the day was at Eisenhower High School where teacher Michaelann Kelley received a $1,000 grant to fund her program of giving her art students their own artistic voices by taking them on field trips to museums, and art galleries during the spring semester. The teachers who received the grants had to submit proposals to AEF’s Program Committee, which is chaired by former Aldine ISD Superintendent Nadine Kujawa. Other members of the committee are Rose Avalos, Sidney Brewer, Richard Cantu, Jeff Hartman and Jocklynn Keville. Mrs. Kujawa said it was exciting for the AEF to finally provide grants to Aldine teachers so they can continue to provide innovative program for their respective students. “This was such an exciting day,” Mrs. Kujawa said. “We have been talking about forming an education foundation in Aldine for quite awhile and it’s so gratifying to finally see all of that hard work turn into a reality. It was such a joy to see the excitement and surprise in the faces of the teachers we provided grants to today. I think our group (AEF members) also enjoyed themselves.” Joining Mrs. Kujawa on the “Surprize Grant Patrol” were AEF Board Members Dr. Wanda Bamberg, Patti Acosta, Shane Clouteaux, Rose Avalos, and John Cornett. Aldine ISD Trustees who also took part in the grant presentations were Dr. Alton Smith and Marine Jones. Accompanying the “Surprize Grant Patrol” on behalf of the district were Ben Wilson, Dr. Linda Rodriguez, Todd Davis, and Stacey Smith. For more information on the AEF, or to make a donation, call (281) 985-6078 or visit www.aldineeducationfoundation.org.