Do you support Trump's immigration policies?
Total Votes: 75
×
You or your IP had already vote. 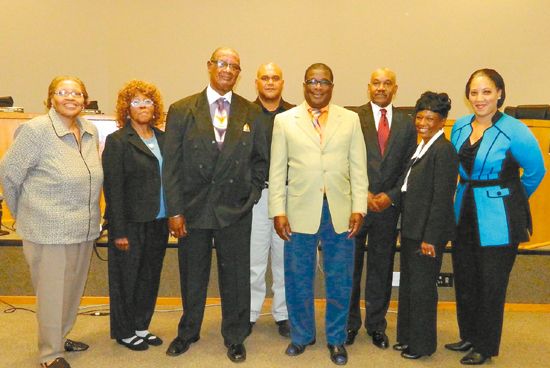 NORTH FOREST – New and returning school board members were sworn into office last Monday night, Nov. 19th, and officers were elected for the coming year.

The evening started with an award to retiring board member Albert Coleman, presented by Lois Edwards and Superintendent Forté.

The election votes were “canvassed,” a formal process that indicated and certified the number of votes cast in the board election.

The new board members were individually sworn into office by judicial officials. Thaddeus Seals was sworn by Judge Mike Parrott, and Linda Bell Robinson was sworn by Judge Zinetta Burney. Judge Parrott teaches a Teen Court in the District, and Judge Burney was at one time an attorney representing the District.

After being sworn to office, the new board acted to elect officers for the coming year.

For Board President, Charles Taylor, Sr. was elected by the board members. For Vice President, Thaddeus Seals. For Secretary, Linda Bell Robinson, and for Assistant Secretary Henry McGowen.

In accepting the presidency, Pastor Taylor said “It is a challenge I take not lightly,” and referred to the challenges still to be resolved in the District in the next year.