Charges have been dropped against 1 in Lone Star College shooting 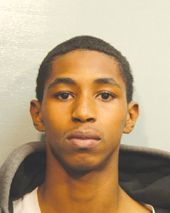 According to the Harris County District Attorney, on Monday, January 28, prosecutors dropped charges against Carlton Berry, a 22-year-old man, who authorities initially believed was involved in a shooting that wounded him and two others at Lone Star College.

Carlton Berry was arrested soon after the Jan. 22 shootings at Lone Star College-North Harris and charged with two counts of aggravated assault with a deadly weapon. But authorities later accused another man, Trey Foster, 22, of being the alleged shooter.

Foster has been charged with two counts of aggravated assault and faces a charge of resisting arrest in an earlier case. He was arrested Friday, January 25, in Plano, near Dallas.

Investigators say the shooting happened after 25-year-old Jody Neal bumped into Foster while Foster was walking with Berry. Foster and Neal argued but went their separate ways.

But when the two ran into each other 30 minutes later, they argued again and Foster allegedly fired at Neal, wounding him in the abdomen and leg. Berry also was shot and wounded, and a maintenance worker for the college, Bobby Cliburn, 55, was hit in the leg.

Authorities say at least 10 shots were fired, causing panic and leading to a campus lockdown.

Berry’s attorney, Robert A. Jones, said his client never should have been charged or jailed because the evidence showed he was a victim. Berry was shot in the left hip, which Jones said was an indication that Berry might have been facing away or running away from the shooter.

Prosecutor Alison Baimbridge said authorities dropped the charges in the interest of justice. She said that as with any investigation, the more witness interviews and evidence collecting that are done, authorities are “better able to determine who was where, what actually occurred.”

Charges were formally dropped during a court hearing Monday, January 28, and Berry was later released from jail.

Foster made his initial court appearance the same Monday. He is being held on bonds totaling $100,000, and if he posts them, a judge ordered him subject to GPS monitoring and a curfew.