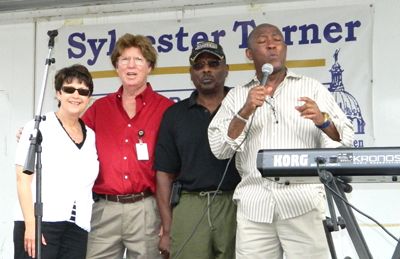 Last Saturday, April 13 saw a huge crowd descend on Sylvester Turner Park on W. Little York and Victory, to have a “Family Day” full of fun, food, games and recreation.

This 6th annual event has become a much anticipated day for all ages in Northwest and Northeast Houston. Turner emphasizes that it is all free, thanks to many sponsors.

The sunny weather brought out a full crowd, starting around noon and going strong until dusk. Plenty of food was available all day, including turkey legs, sausage on a stick, hot dogs, popcorn, nachos and more.

Games included baseball on the fields, with Texas Southern and Southern University playing at the north end, and Youth baseball on the southern fields. Basketball was also a favorite, with contests for players.

Music was provided by J. Paul and the Zydeco Nubreeds, and the Eisenhower Jazz Band played Jazz music. The Aldine Dance company from Carver high school performed dance routines, and the public was welcome to dance themselves later in the day.

Huge “Hamster Balls” with people inside, provided by Comcast, were a great hit and an hilarious sight.

Seniors took part in games, including bingo and dominoes.

To help with the parking, METRO provided shuttle buses from three nearby locations.