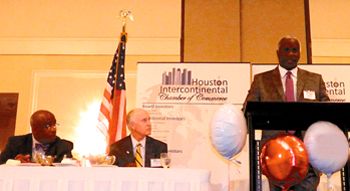 NORTHEAST – The annual State of the School Districts presentation, at the HICC Chamber luncheon last Thursday, was enlivened by an unscheduled visit by Congresswoman Sheila Jackson Lee, and a presentation by Texas Children’s Hospital, announcing their new clinic in the Greenspoint area.

In her remarks, Jackson Lee emphasized her commitment to education in all the school districts in her area, and her work to earn STEM grants for them. She praised the legislature for reducing the required number of tests for seniors for graduation. She said that North Forest “had the ability to succeed,” and should have been allowed to. This was especially poignant since the previous North Forest superintendent, Dr. Adrain Johnson, was in the audience. She emphasized that “children are our first priority.”

This was followed by presentations by each of three superintendents on the status, and highlights of their respective school districts.

Dr. Ralph Draper said his district had grown to 37,000 students, and with the development of the ExxonMobil campus on I-45 and the Springwood Village development, his district and others could look forward to continued growth pressures.

Draper discussed the new state TEA Accountability ratings, noting that they were very complex, made up of 4 indexes that were basically different from previous years, and most districts were trying to analyze them and work to improve their scores.

However, he did note that almost all of his campuses met the high rating of “Met Standard”.

Draper also said the goal at Spring was to imbue students with a measure of creative genius, as they would define it.

Dr. Jim Cain made the presentation for Klein ISD. He noted growth to 48,000 students, a thousand more than last year, with expectations of a continued surge as ExxonMobil builds out their campus.

Cain said HB5 not only reduced the number of required tests for senior, but opened a number of “pathways” for their career choices. He noted that the state still had to deal with the “property rich vs the property poor” school funding formula.

Speaking for Aldine, Assistant Superintendent Archie Blanson reviewed the ethnicity of the district, and its growth to 66,200 students on 76 campuses.

He noted that AISD is hiring 800 new teachers this year, and all teachers will receive pay increases.

Aldine had disappointing results in the new TEA Accountability ratings, with only 73% or 50 of their campuses rated “Met Standard” and 20 campuses getting the “Improvement Required” rating.

Blanson said the district is holding weekly meetings to solve these problems, especially in the reading and writing areas.

In previous comments, Superintendent Wanda Bamberg had noted that schools could get a failing rating if they fell short in any of the four rating areas.

Bamberg noted, as did Blanson, that the rating system is very complex, requiring study by her district to learn how to improve.

Blanson said the district has entered into a partnership with the private charter school YES Prep Academy, and will offer courses through them at hoffman Middle School.

He also noted a new INVEST program to evaluate teachers and reward them with performance achievements.

Blanson said one of the highlights of last year was the establishment of an Aldine Education Foundation, which has raised considerable money for scholarships to any college of a student’s choice, and awards of teacher’s innovation grants in schools.

The Aldine school district is financially strong, he said, with a Fund Balance now at $192 million.

In answers to questions, Blanson said that class sizes at secondary schools will be able to be reduced, with the new state funding.