TRASH PICKUP SUSPENDED – Program to be re-evaluated in future 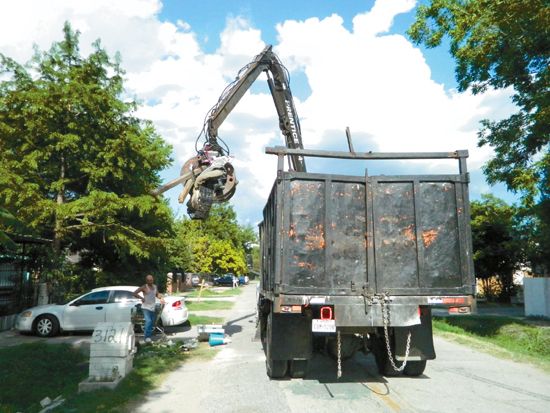 The board of the East Aldine District, after meeting last Monday night and reviewing the costs and results of the Heavy Trash Pick-up program, decided to suspend the work immediately, and instruct residents not to put out any more heavy trash in the four zones designated.

East Aldine District president David Hawes reviewed the history and scope of the program for the board. He stated that the contract, which called for monthly payments to the contractor of $13,750 did not cover his costs, for a variety of reasons. These included underestimating the amount of trash that had accumulated since the Pct. 1 program was terminated by the redistricting last year, the inclusion in curbside trash of items other then residential trash, the inclusion of trash at curbside from “dumpers” outside the district, and the large size of trash piles.

The contract with OFS Solid Waste had not limited the size or nature of the trash, therefore allowing the overruns to occur, Hawes said.

In addition, because Pct. 2 had never picked up curbside heavy trash, even those within the East Aldine District, it became apparent that there were years of accumulated heavy trash that residents were attempting to get rid of.

Hawes said that after the first round of pick-ups in the four designated districts, the contractor had disposed of 2500 tons of trash, or 10,560 cubic yards.

After 10 weeks, this had grown to 443 truckloads, and the contractor was using large 25 cu. yd. trucks.

Due to this overabundance of trash above the original projected amounts in the contract, the OFS Solid Waste company had amassed land fill fees far beyond the monthly payments, and asked the District to assume the costs.

The board assessed its options, and reviewed the documentation to assure that the work had actually been done. Therefore, after verifying the accuracy of the claims, they voted an additional $202,000 to be paid to OFS for work completed.

However, it was also decided that the current contract was not feasible, and they also voted to terminate the heavy trash pick-up.

Trash was due to be picked up in the South zone, and a survey by the staff indicated that most residents had already put this trash out for pick-up. Therefore it was decided that a final cleaning or pick-up would be made in the South zone, subject to the size and type limitations that were announced and published last month. This limited the trash to residential type, not commercial or business trash, and the size limitation is 5 cubic yards, or about 4’ x 4’ x 8’.

The District will re-examine how it can pick up trash in the future, and ask for an RFP from interested parties. It is assumed that this pick-up will be more limited in size, and occur only once or twice per year, said Hawes. Precinct 2 has indicated to the District that they will pay $50,000 yearly toward future clean-ups. 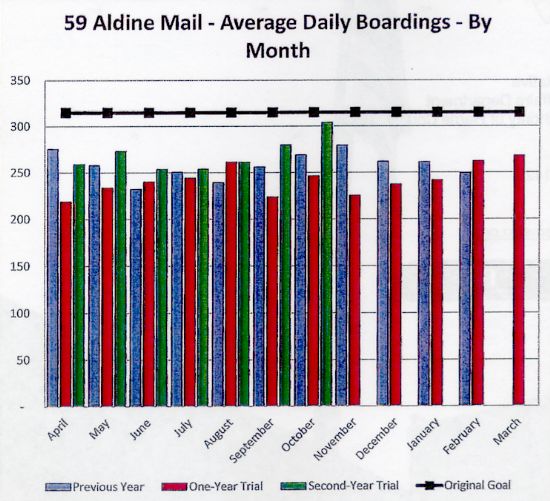 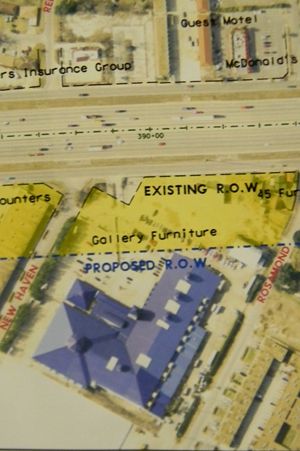 The project includes portions of I-10, US 59, and SH 288 near downtown Houston; Hardy Toll Road from north of Downtown to Beltway 8 (BW8) North and I-610 and BW 8 North between I-45 and Hardy Toll Road. And the project is divided into 3 segments:

For Segment 1, for instance, alternative #4 is a 12-lane section, which includes 8 general lanes and 4 managed lanes; and additional right-of-way would be acquired on the West side of I-45.

A Hardy Toll alternative was discarded because it would not reduce congestion on I-45 compare to the other alternatives.

Officials with the TxDOT said in the report that this project could cost $1.13 billion and it would not be ready to start until 2025. However, residents and businessmen who attended the meeting looked to all alternatives to see which one will have the least impact on their properties.

Julian, a businessman who has a tax service and a car insurance company on one side of I-45 thinks that the best alternative for everybody is the elevated lanes in the center of the road because the construction “will take a smaller portion of parking lots of businesses and the other 2 alternatives will take-off more space of the business.”

“Look at Gallery Furniture, if they (TxDOT) do this alternative (acquiring space on the East side of I-45), their building would disappear,” said Julian. Nery, also a businessman, has two businesses, each one on either side of the freeway and agrees with Julian. “It would have less impact on the businesses,” said Nery, referring to the elevated lanes alternative.

With an alternative of acquiring space on one side of I-45 or the other, what would happened to Wal-mart at West Rd., to Aldine 9th grade school and Aldine ISD William A. “Bill” Smith Stadium located at 10400 North Freeway and many other car dealerships? Julian thinks that at the end the City would opt for the alternative that could cost less. “And the land of those big businesses costs a lot,” said Julian. But it is also true that “doing the elevated lanes is expensive.”

Other residents said they are worried because they have properties along the freeway and they will be affected by the project but “I also know the freeway is a total mess,” said a property owner.

“I really do not care, I’m selling my property and moving out to the country,” said a retired man. “I have some land in the country and always wanted to live there.

TxDOT is evaluating several criteria such as the impact on businesses and houses in the area, taxes, as well as environmental issues: noise, land use and cultural and natural resources.

The next public meeting is today, Tuesday, Nov. 19, at Jefferson Davis High School, Houston, TX. 77009 where the information will be presented again, and the public can leave feedback on reasonable alternatives for highway improvements. All alternatives presented are preliminary and subject to change. 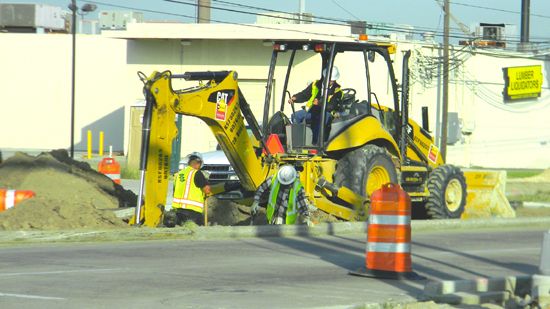 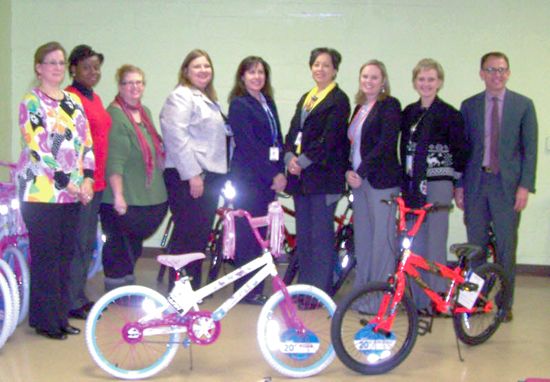 The Aldine Noon Optimist is sponsoring a reading competition for local Aldine ISD elementary schools with one boy and one girl winner at each campus. The announcement was done during a luncheon last Wedneday, November 13, 2013.

Students earn an entry for every book they read and a drawing is held at the end of the reading competition. The more books they read, the more entries they will have for the drawing.

There are 9 elementary schools that receive a boy’s and a girl’s bike for the drawing: Mendel, Orange Grove, Oleson, Francis, Odom, Calvert, Stephens, Johnson and Worsham elementary.

Bicycles were purchased with a grant from East Aldine Management and donation from Prosperity Bank. 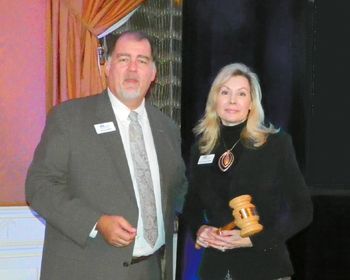 GREENSPOINT – A dining room decorated with table settings and candelight was the attractive setting for the annual Starlight Business Awards of the Houston Intercontinental Chamber.

The event was held last Thursday evening, at the Hilton Hotel Greenspoint, with about 150 chamber members and business persons attending. The title sponsor was Noble Energy, with 14 additional corporate sponsors.

After opening remarks, Chamber president Reggie Gray gave an annual report of chamber activities, accomplishments, and goals for the coming year.He reported that there were 600 company members, and 3000 social members in the chamber. His report on activities relied heavily on corporate partnerships and foreign contacts that have developed.

After the report, the new board members were sworn into office by president Heather Dunagin. The board has 34 business representatives, of which 15 were present for the ceremony.

Next, individual awards were made to companies in various categories. These awards are as follows:

— Richard Cole, a representative for AT&T for 39 years, and a board member

— Gary & Heather Montgomery. Gary is a civil engineer with Jones & Carter, and responsible for many projects in North Houston. Heather is a past president of the Chamber, and active in the United Way 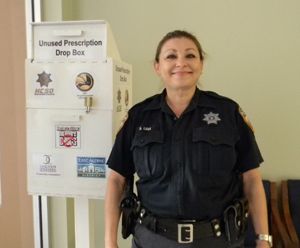 Aldine Sheriff’s Storefront in Harris County is the first permanent location to have a drop-off box for expired or unused drugs.

–Unused or expired prescription medications can cause accidental poisoning, overdose and abuse.

–Pharmaceutical drugs can be just as dangerous as street drugs when taken without a prescription or a doctor’s supervision.

–The majority of teenagers abusing prescription drugs can get them at the home medicine cabinet.

–Unused prescription drugs thrown in the trash can be retrieved and abused or illegally sold; drugs that are flushed, contaminate the water supply.

Help save lives and protect the environment by using the drop-off box for your unused drugs at the Aldine Storefront. 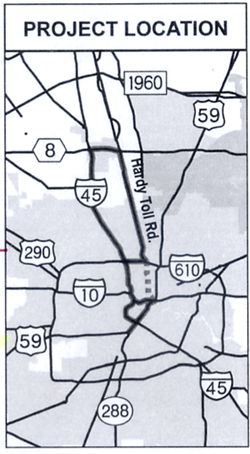 NORTH HOUSTON–The Texas Department of Transportation (TxDOT), in cooperation with the Federal Highway Administration, will hold public meetings for the North Houston Highway Improvement Project. The project limits are from the interchange of US 59 and SH 288 to the interchange of I-45 and Beltway 8 North.

The purpose of the meetings is to present information about, and received public feedback on, reasonable alternatives for highway improvements in the North Houston corridor; the alternatives evaluation process; and how community feedback has been incorporated in the planning process.

The same information will be presented at both meetings. Materials will be in English with some materials also in Spanish. Spanish-speaking project team members will be available to talk with Spanish-speaking attendees. After the meetings, the information will be available for review and reproduction at www.IH45NorthandMore.com and at the TxDOT Houston District Office located at 7600 Washington Avenue, Houston, Texas 77077.

Comments may be submitted at:

Comments should be e-mail or postmarked by December 6, 2013.