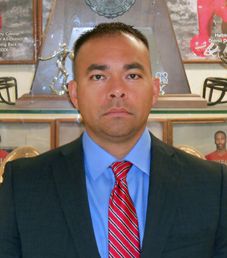 The football bug bit Andy Garza at an early age and is he ever glad it did.

Garza served as Mulvaney’s defensive coordinator for four years, so he knew the players, assistant coaches and the school administration. The transition from assistant coach to head coach was smooth, but admitted being a head coach for the first time had its challenges.

The Generals finished 5-5 on the season and narrowly missed out on the playoffs. They entered their final game against Nimitz High knowing that a win and they were in, but they lost a heart-breaking 52-44 decision to the Cougars, which eliminated them from postseason play.

Despite missing out on the playoffs, MacArthur had the most wins of any Aldine ISD varsity program and earned Garza the Northeast News’ Coach of the Year honors.

Football has been an important part of Garza’s life. He was an all-district linebacker at San Antonio Roosevelt and helped lead his team to the 1995 Class 5A Division II state championship with a 17-0 win over Flower Mound Marcus.

After high school, Garza played at Howard Payne University and after college he began his coaching career.

Garza has 12 years of experience in the coaching profession. Prior to coming to MacArthur, he served as a defensive assistant at Navarro College, one of the most successful junior college programs in the state.

“Coaching is all I really ever wanted to do,” Garza said. “I’ve loved the game since I was a little boy. I always wanted to have a career in the game.”

When Garza was named the General’s head coach, one of his first goals was to bring back some of the long-standing traditions, such as the five star decal on the helmets, and the slogan, “MacArthur Pride Never Dies.” That slogan is displayed prominently in the field house and was a mainstay when former head coach Bob Alpert was building one of the most successful programs in the area in the 1980s and 1990s.

“I talked to a lot of alums when I first got the job and I wanted to bring back some of the traditions that they had,” he said. “Some of our kid’s parents played here and are proud of what they accomplished. I want our kids to just not play football, but to be aware of the proud tradition that’s been around here.”

Garza’s coaching, and life, philosophy is “adapt, improvise and overcome.” He and his staff instill those three words in their players and it came in handy even before the season began.

During a scrimmage a week before the season was to start, starting quarterback Doug Steed was lost for the season with a knee injury. Steed was the only experienced quarterback on the team. As a junior he threw for 1,43 yards and 11 touchdowns. With the season a week away, it was time for Garza and the Generals to “adapt, improvise and overcome.”

Garza moved wide receiver Joseph Pellerin to quarterback and asked running back Derrick Ford to be the leader on offense. Ford responded with more than 1,200 rushing yards and 13 touchdowns, while Pellerin did a good job his first year under center.

“When Doug went down, we didn’t panic because we’re not about making excuses,” Garza said. “We adapted. Obviously, we didn’t want to see Doug get injured, but we had to move on and keep going.”

The Generals won their opener, 42-0, over Jeff Davis, and then fell to Fort Bend Ridge Point before winning four of their next five games.

They were in the thick of the 18-5A playoff hunt up until their final game of the season, an eight-point loss to Nimitz.

“We were eight points away. We have unfinished business. That’s our rallying cry going into the offseason and spring practice,” Garza said. “I truly believe that football can build a better person. The adversity we went through losing Doug taught all of our kids that if they continued to work hard, good things would happen to them. They can carry that with them the rest of their lives.”

“I’ve taken something from every coach I’ve either been coached by or worked for,” Garza said. “I also read a lot about coaches like Tony Dungy who have been successful in this business. I also go to as many clinics as I can. I think it’s important for young guys like me to listen and use what I learn to benefit our kids.”

Garza and his wife Kathryn have a daughter and a son. Madison is six and Braden is 19 months old. He looks forward to a long and successful tenure at the General’s head coach.

“My ultimate goal is to create a program like they have a Katy or Converse Judson. Every year we want people to know MacArthur is going to win when teams play us. I want kids to look up to our staff and me and to remember us long after they’ve left MacArthur. Our job isn’t only to teach them football, but to teach them life lessons.”