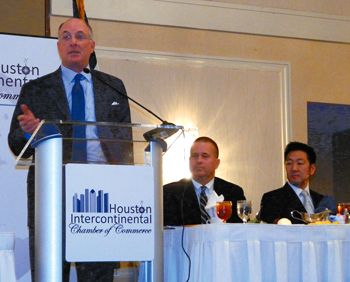 GREENSPOINT – The Houston Intercontinental Chamber heard from some industry experts at last Thursday’s Economic and Energy Forum. The event was held at the Sheraton Hotel on JFK Boulevard, with about 90 persons attending.

Featured speakers at the luncheon were Ken Fisher, CFO of Noble Energy, and two FBI agents from Washington, Douglas Thompson and Michael Huan. These agents specialize in what is known as the FCPA act, or Foreign Corrupt Practices Act. In other words, they are charged with stopping or prosecuting the practice of winning contracts by paying illegal bribes.

Fisher spoke about the new technology in the oil and gas business, and how it has changed the Energy picture for the United States. This technology is a combination of oil and gas extraction through a process known as “Hydraulic Fracturing” and horizontal drilling techniques. Fisher explained that this was not really new technology, having been known and used since 1947, but had come into favor in the last few years.

The combination of fracturing with horizontal drilling is what has made this method successful, he said, and much of that success can be attributed to Houston oilman George Mitchell. It is being used in several major fields in the United States, namely the Marcellus field in Pennsylvania, the DJ Basin in Colorado, and in Texas the Eagle Ford, Bakken, and Permian Basin Fields.

Due to the high level of production, Fisher said that by 2016 or 2017 the United States will be the world’s biggest producer of oil, topping Russia and Saudi Arabia, who are now number one and two.

Fisher spoke about the concerns people have about environmental contamination from this method of hydraulic fracturing. He went to great lengths to explain that it can be done safely, and if done correctly there is no danger.

He demonstrated through illustrations how his company, Noble Energy, applies industry “best practices” to their drilling to avoid environmental impacts.

Ironically, as he spoke, many people in the lobby were reading the day’s copy of USA-TODAY, with a front page article about the oil boom, and how it “poses risks to health and safety” and concerns people throughout the country, especially when they are near active drilling sites.

In a related talk, the FBI agents explained how paying bribes in foreign business deals is illegal, and not acceptable to the U.S. authorities. They are charged with finding, stopping and prosecuting companies that are willing to do business with bribes. The U.S. has passed the Foreign Corrupt Practices Act to deal with this problem.

Michael Huan said these tend to be in the Energy, metals and mining, and technologies industries.