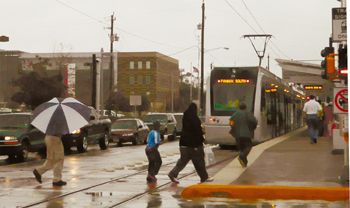 NORTH HOUSTON  METRO threw a party and hundreds or even thousands of Houstonians showed up for a good time, and to try out the new light rail transit system that open on Saturday, December 21. Rides were free all day, and in addition, METRO had lots of events at Moody Park, a half-way stop on the line toward downtown, to entertain and inform the public about transportation options.

Wet weather put a slight damper on the day-long festivities, but METRO planned for this with complimentary umbrellas, a covered pavilion for the concert, exhibits in tents at Moody Park, and lots of attendants and police present to direct pedestrian and vehicle traffic for everyones safety.

The new Red Line, as the north extension is named, will provide easier access to downtown, and some think it will attract riders from downtown to the shopping and neighborhood stores in the Northline area. It is also expected to spur further development on the Northside, along Fulton where it runs, but also further north on Airline, North Freeway, and more. In fact, when TxDOT begins reconstruction of the North Freeway, it may be the only good link to commute to the city center.

The new rail line runs 5.3 miles, joining the existing line at the University of Houston Downtown campus on Main Street. The total mileage is now about 13 miles, but next year two more lines will open to the East end, providing even more options. Now, workers can use the line to reach jobs in downtown or the medical center, and sports and public shows at Reliant Center. Total travel time to downtown is about 20 minutes. There are 8 stops between Northline Transit Center, and UH-Downtown.

The Red/North line took 4 years to build, and cost $756 million to build.

Among the booster of the new line are Jeff Procell, general manager of Northline Commons, and Rebecca Reyna, executive director of the Greater Northside Management District.

Procell says that he can forsee shoppers travelling north on the line, to access Northline Commons store, the only major retail center on the line, including downtown.

Reyna thinks the line will be a catalyst for further development in the northside, and her organization has been introducing developers and businesses to the potential. Procell said that his center has been working with METRO for almost 20 years to make available land for the transit center on Fulton, near HCC-Northline, Walmart, the Post Office, and his center.

Metros president, Tom Lambert, said that after the first week of ridership, they were very encouraged by the number of boardings and the general acceptance of the line in the community.