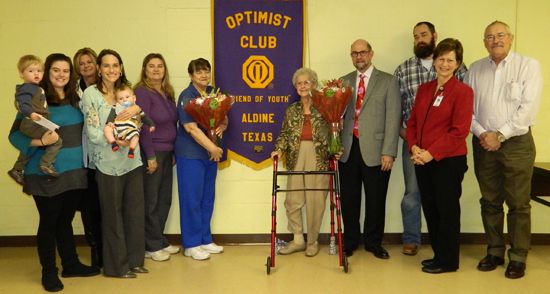 Club president Steve Mead led the program for the thirty attendees, including family members of the two men. Some of the Romoser family had traveled from Oklahoma to participate.

The ceremony included singing Amazing Grace, led by Stacey Smith, and reciting the Optimist Creed. The names of the two men were added to the Memory Banner that the club maintains.

President Mead reviewed the history of the club, and the participation and service of the two men being remembered that day.

The club started on July 16, 1986 with eleven members, sponsored by members of the Spring Cypress Optimist club.

Wayne Romoser was a charter member of the club, and served as president of the club in the first year. In 1991 he received the “Optimist of the Year” award. He was instrumental in bringing the C.H.I.C.K.E.N. Club to the Aldine Schools, for 4th graders to avoid drugs and peer pressure. Wayne and his wife Jackie owned and operated the M & M Auto Supply firm on Aldine Bender near the clubhouse.

Jim Cooper was a member of the club since 1999. Although confined to a wheelchair in later years, he managed to get things done as needed, often with the help of wife Carolyn and daughter Debbie. He especially helped with the golf tournament. Jim worked for the Sign and Banner Company. He also was a member of the Family Life Christian Church, along with his family. He first became familiar with the church when they needed a sign, he said. Jim involved all of his family in Optimist, but especially his beloved grandson Austin Haecker.

It is said that the mission of the Optimist International is to “provide hope and a positive vision to bring out the best in kids.”

Wayne Romoser and Jim Cooper were honored by the club last week, because they did just that and left a legacy of character for others to follow, said president Mead.