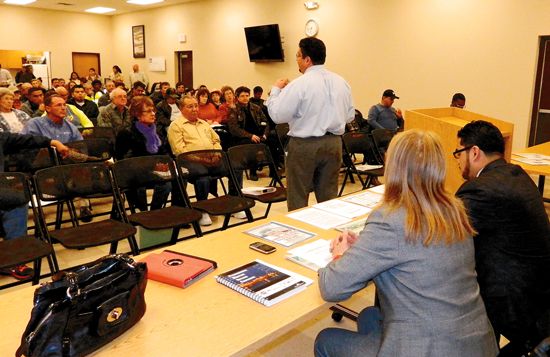 NORTHEAST – Over 125 residents of the neighborhoods served by private water utilities in the Aldine area attended a meeting last Tuesday evening, held in the meeting room of the East Aldine District on Aldine Mail Route.

The reason for the meeting was to discuss recent increases in the water bills from Suburgan Utility Company, and the quality of water and service that residents were receiving from them.

Representatives from Sunbelt Utility company were present, but no one from Suburban Utilities attended, even though they were invited.

Recent tests had indicated that lead and copper levels were excessive in some water supplied by these utilities, and an attorney for Sunbelt, Elliott Barner, and an engineer John Montgomery, explained to the audience that this was not uncommon in older systems with galvanized pipes, and orthoposphates had been injected into the water to correct the problem.

Walle explained that he has introduced legislation 3 times to limit the amount that utilities can raise rates, but it has not passed the Legislature each time. However, he has submitted a protest letter to the State Water Board regarding the $60 monthly surcharge that Suburban Utilities is now trying to collect, for system upgrades. He also said that a SOAH (State Office of Administrative Hearings) had been scheduled on this issue, on March 27th in Houston at the state offices.

Linda Brookins of the state TCEQ explained that Suburban had planned to collect the $60 surcharge for 48 months, totalling $998,000 for system maintenance and upgrades. She said the state has only limited oversight on these privately owned utilities, and cannot act unless they are incapable to servicing their customers. She explained that the way the law is written, the utility can continue to operate as long as they meet minimum standards. She indicated that Suburban had not spent their money to maintain their system, but that this was not required by the state.

Homeowners at the meeting were not happy to learn that no immediate action could be taken by the state or county authorities. Many said they had low water pressure, some no water at all, and calls to the utility were not answered.

Brookins indicated that after the SOAH hearing, improvements might be expected, and if not the state could always file a lawsuit and put the utility into receivership, with another operator. However, the state would not assume the company, she said.

Brookins said complete documentation is very important in these matters. Also, if water service is not good, she urged homeowners to call her Water Complaint Number, 713-767-3500 with details.

At the meeting, an engineering report was available, detailing work that was required by Suburban Utility Company to bring their four systems in compliance with requirements of TCEQ. It was revealed that the state has cited the utility for deficiencies and required these improvements, and in fact the engineer’s report said that the only way to fund the work would be by a surcharge. This report suggested a $45 monthly charge for a period of five years, raising a total of $3,815,700 for work required. There was no explanation for why Suburban was charging $60 per month instead of the recommended amount.

Some attendees raised a concern that Suburban might collect the money, but not provide the improvements. In fact, the TCEQ representative said they owed back taxes, and have been fined for utility deficiencies.

Walle and Garcia emphasized how important it was for a large contingency to attend the SOAH hearing on March 27, with detailed complaints. The East Aldine District will provide a bus, leaving their offices at 9 a.m., to take a group to the hearing. Call 713-595-1232 to indicate you want a seat on the bus.