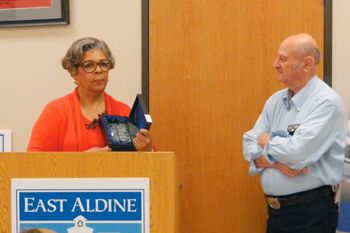 East Aldine District held their quarterly networking luncheon last Thursday for all the organizations in the district. After welcoming remarks by chairman Gerald Overturff, each group introduced themselves and gave a brief update on their activities.

Major announcements were made by Lone Star College’s Johanna Boley, who confirmed that the college is proceeding with plans for a new building, and new workforce and academic programs, in the Town Center being planned on Aldine Mail Route. She said the campus will have its first classes there in the Spring of 2016.

District director of services Richard Cantu gave an update on public safety in the district, noting that the “bike” patrol is now also mounted, with deputies on horseback in the parking lots, parks, and trails of the district. This is in addition to the bikes and ATV machines they ride, he said. There are now 10 deputies and one sergeant working as contract deputies in the district, the largest contract group the sheriff has in the whole county.

The newest member of the deputy team was introduced, Brian Bevil, a MacArthur grad and previously a professional baseball player with the Kansas City Royals.

Cantu introduced the nuisance abatement officer, Jeremy Thomas, who has been working with the apartment managers in the area, and the assistant county attorney, Celina Vincent, to implement the SAFE program to clean up the apartments and enforce lawfulness and safety in them.

Cantu said a contract had been let for improvements in the medians at the entrances to the District, specifically at E. Mt. Houston at US59, JFK at the Beltway, and Aldine-Westfield at the Beltway.

New construction is underway for water and sewer lines in Zone 11, a large neighborhood with 1000 homes in the area east of US59 and north of Little York. A grant from the state for $10.5 million from the Texas Water Development board is paying part of the costs for this $20 million dollar project, which has great potential for economic development on the east side of US59. This project is a “first” for the state and the district to make use of new legislation for “urban colonia”.

Jose Rivera, of NCI, explained their planned partipation in the Town Center project, and invited everyone to an Optimist Club meeting at the EAMD offices on June 11th to hear about NCI.