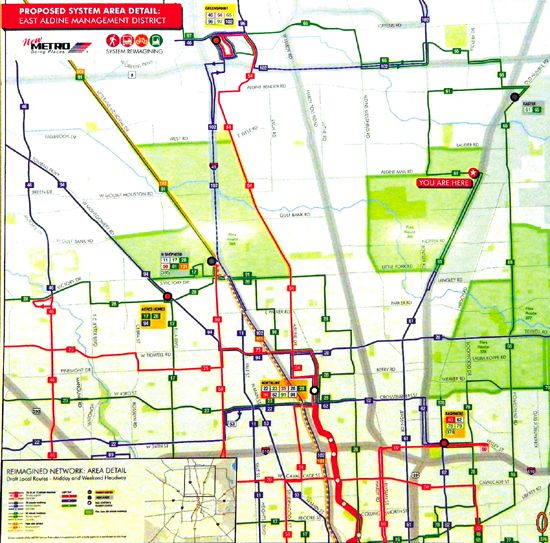 HOUSTON – For the last few months, METRO has been re-examining its route system, and is now ready to announce a radical new redesign, according to a presentation made last Thursday night by METRO representatives at the East Aldine offices.

Representative Armando Walle had requested the meeting, to learn the fate of the Aldine Mail Route No. 59, and what transit service might be planned after the new Lone Star Campus is built on the Town Center site.

Jim Archer and Jose Pulido of METRO revealed that the board will get a Draft Plan in mid-August, and if they adopt the recommendations, a new route structure will be put into place June 7, 2015.

METRO officials said that there will be many benefits to the new system:

Changes to the system were made after extensive meetings and community input over the last year, but this is a draft report, and additional comments and input are sought. You may send your ideas or comments by email to reimagining@ridemetro.org.

A key feature of the new system, as presented by the METRO staff, is the new concept of FLEX ZONES. There are five of these, in areas where ridership on fixed-route lines is too low. They include the following route numbers:

Here is how the Flex Zones are intended to work:

What are Flex Zones and how do they work?

Some parts of our service area have relatively low levels of population and street patterns that make it impossible to design an efficient bus route. Yet these areas still have a need for transit service. Flexible Service is a more effective way to offer basic access to hard-to-serve areas.

Within designated Flex Zones, customers can call to request service, which will pick them up at their curb or at a nearby intersection. The service will take them anywhere inside their zone or to a local transit center or connection point served by multiple fixed routes where they can connect to the rest of the network.

Service will be available once an hour at a time specified by when you call, and it will make stops to pick up other people. However, it is an efficient way to provide access to meet the needs of a community where fixed route bus service cannot be effectively operated.

Also, some customers within the Flex Zone area will be within walking distance of a fixed route service giving multiple options for utilizing the transit system. The flexible service allows riders to make the best decision for their trip.

METRO will discuss the potential Flexible Service with the communities in which it is proposed to be sure it is operated in a way that best meets their needs.

It was noted in the meeting, that the new route maps do not show any East to West bus lines, and therefore no direct service to the Town Center site, the proposed Lone Star College on Aldine Mail Route, or access to the Flea Markets on Airline Drive, shopping on the North Freeway, or connections between Aldine High School and MacArthur High School, except through a very circuitous route through the Transit Centers.