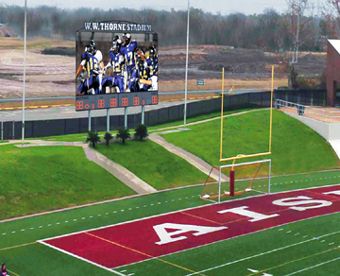 A big thing is coming to Thorne Stadium, and just in time for the upcoming football season.

When the 2014 season opens on Aug. 28, fans and players will be greeted by a new video scoreboard that will be capable of showing live game action and replays. The 36×19-foot Spectrum video board should also help attract post-season games in addition to the slate of regular-season games scheduled for this season, according to Aldine ISD Director of Athletics Richard Delgado.

“We are very excited about our new addition to Thorne Stadium,” Delgado said. “One of the things we are really pumped up about is how much added excitement the new video board will provide for our kids when they see themselves on the big board. It should also give us the chance to host more playoff games.”

Delgado said the athletic department surveyed districts across the state and received positive feedback about the impact a video board can have on a district and the community.

He added it will also serve as a teaching tool for AISD students, who will help run the board along with two full-time AISD technicians.

“We’ll have six kids from Carver High assisting with running it this first year,” Delgado said. “It will be good training for them. Three will work in the control booth in the press box with our technicians, while the other three will work the on-field cameras.”