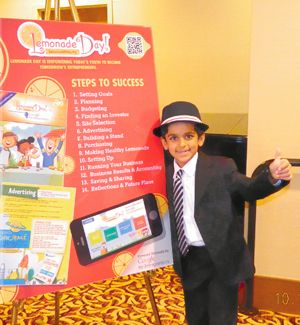 The Governor’s Small Business Forum, an all-day event hosted by the Houston Intercontinental Chamber of Commerce, was astounded to hear not only the usual government and business speakers, but a success story from an 8-year old entrepreneur that made all his money with a lemonade stand and some smart marketing.

The event was held last Friday, October 17 at the J. W. Marriott hotel near the Galleria in Houston.

It included workshops or breakout sessions on various aspects of conducting a successful business, and interacting with agencies and government bodies.

A luncheon followed the breakout sessions, with greetings from Larry Ruggiano for Governor Perry, a keynote presentation by Andres Alcantar, chairman of the Texas Workforce Commission, and a overview talk about business corruption and security from FBI agent John Blake. After the talks, Sonia Gaillard of the Governor’s office presented a series of awards to outstaning business entrepreneurs.

But the most outstanding talk was given by a young 8-year old boy who had to stand on a chair to reach the microphone, and then delivered a ten minute talk about how he had made money, a lot of money, by running his own business, which was a lemonade stand.

Yash’s advice to the assembled businessmen many times his age: give your customers a good experience, and you will have repeat business. In addition, promote your business and have fun.

Yash has had a lemonade stand for two years, with his younger brother, and had sales of about $5000 per year, and profit of about $4500, he said.

Yash donated his profits, almost $6000 with a matching donor, to Texas Children’s Hospital, and helped raise an additional $59,000 by launching the hospital’s fundraising campaign.

Companies that received achievement awards from the Governor included:

The Governor’s message was delivered by a video recording, and he emphasized that Texas was the best place to do business, having the best small business climate, with low taxes and an a trained available workforce.

In his remarks, Texas Workforce Commissioner Andres Alcantar noted that Texas is adding over 400,000 new jobs every year, a quarter of those in the Houston region. Expanding business is occuring in petrochemicals, manufacturing, and healthcare, he said.