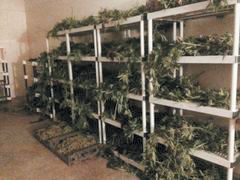 The discovery of nearly 500 marijuana plants with a street value of almost $2 million was made at 7022 Dewberry Shores Ln.

Deputies were led to the home after a service technician with the electric company noticed the power source had been tampered with.

No arrests have been made.

Assisting in the investigation were HCSO patrol deputies and investigators with the Harris County Sheriff’s Office’s Narcotics Task Force.